The last time out, we convinced you to switch to playing Daily Fantasy Basketball (at least not entirely). We give you a bunch of reasons but the one that should resonate the most is CASH. Real, cold, hard cash.

But the thing is, these tournaments are highly uncertain. How do you expect to consistently win a tournament of a thousand players, most of them among the world’s best? Unless you’re freaking Nostradamus, there’s absolutely no way to do that. (And I highly doubt Mr. Nostra can do a better job.) Too much factors come into play and as you and me might have experienced in the past, that’s an anti-success recipe.

However, that does not mean you won’t ever cash in. One of those game types that can be very profitable is called 50/50 or a double-up. It doesn’t offer as much dough as the tournament types but it’s much predictable.

A 50-50 league means the top half of the league will get paid while the bottomers don’t. The good news is, in a field of 100 entries, the first place in the field receives as much as the 50th. No more, no less. With these things in mind, we aim to give you some helpful strategies on how to win 50-50 leagues in daily fantasy basketball.

This Ain’t No Lottery

You know what they say about the lottery: you have more chances of getting hit by lightning instead of winning the freaking thing. In 50/50’s, we can truly say it’s the opposite! 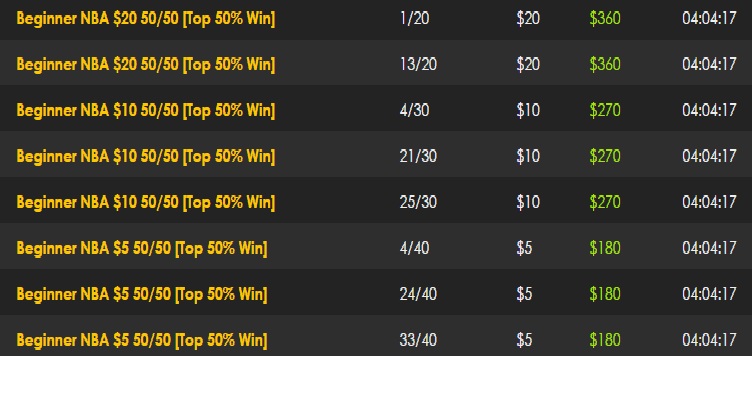 Take a look at the image above as an example. The middle columns are the entry fees and the one farthest to the right is the prize. That would mean a $10 entry could give you an additional $17 if you finish inside the top 10. (270 bucks divided by 10=27). If you enter, say, three games for the day and you finish in the top half in all of those tournaments, you’d have $51 for the day! It doesn’t sound much but it’s almost a sure thing compared to the other contest types.

Your choice of players should be influenced by this fact. NEVER draft players with a history of inconsistency. No homeruns this time, only singles. That’s why in these formats, players like Lou Williams, Matt Barnes, or Gerald Green should be avoided at all cost unless you don’t have better choices.

On the other hand, sure-fire contributors like Zach Randolph and Thaddeus Young should be rostered more often than not. Z-Bo doesn’t do anything else but score and rebound but he contributes in those categories at an elite level. His double-doubles is as inevitable as anything in basketball. Young, too, is a stud, having topped 30+ points in seven of his last 10 outings at a fairly decent price.

As a rule of thumb, if you can get at least 5 points for every thousand you spend, you’re more likely to put dough in your pocket.

For the most sensitive of moral senses, it’s cheating but technically, it’s not because it’s legal. Like Mr. Bean here, you can take a look what your co-competitors are up to with their line-ups. FanDuel lets you see player usage once the line-ups lock while DraftKings only lets you do that if the players lock. Either way, seeing players that have high draft usage on your team is a validation of how good your line-up is. You cannot see this feature as you draft your players today, but take note of the same cagers tomorrow, and you’ll be in good shape.

Injuries (and to a lesser extent, personal issues) are a big part of basketball. That’s why it pays to check your line-up at least 30 minutes before game-time for any news about those kind of stuff. This is very helpful, especially if you play the Spurs, where Gregg Popovich habitually rests his old dogs to save them up on the playoffs.

Just because 50/50’s are surer way to cash in than other tournament formats, that doesn’t mean it will come easy. It’s not only you and me that have figured that out. Many of the world’s best fantasy players ALSO PLAY 50/50’s! That’s why you should never underestimate and go hard with your kits, advanced stat delving, etc.

Also, choose 50/50 leagues that are much larger (50 or 100 entries preferably) to boost your chances. If you’re only starting, swim with the minnows first or you’ll just get eaten by the sharks.