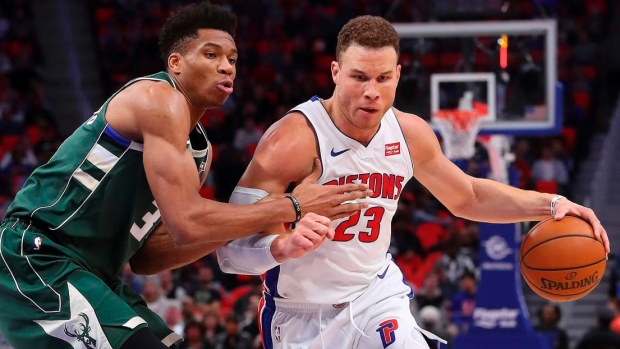 As basketball evolved into more of a positionless game, the line between forwards, guards, and centers has blurred. The same can be said of the power forward position. From bruisers and bangers, the modern power forward is expected to space the floor, bring the ball up if needed, and basically do everything. We know that many of the top centers and small forwards are also eligible for the “4” but since we want to rank players uniquely for every position, we arrived with this. Here are the 5 best power forwards for fantasy basketball:

Antetokounmpo has all the tools to be the top player in fantasy basketball. Sitting right now at No. 9 on the ESPN Player Rater and Yahoo rankings, the only drawback to his game is three-point shooting and free throw percentage (to a lesser extent). The Greek Freak is making only 0.4 threes on 2.4 makes (17%) and shooting only above 69% from the stripe in nine attempts.

Even so, Antetokounmpo is an unstoppable force in other areas. He is averaging 26.6 points, 12.8 rebounds, six assists, 1.3 steals, and 1.5 blocks. The 4-plus turnovers a night stings a little bit but you can’t be too picky, can you? He is also shooting 58% from the floor so it all evens out.

If he starts making threes at a higher rate while toning down a bit on lost possessions, we are looking at a top-3 fantasy basketball player regardless of position. Currently, he is sitting atop the list of the best power forwards for fantasy basketball. And did I mention he is just 24 yrs old?

The Bucks predicated their offense on spacing, ball movement, threes, and layups that’s why it’s either paint or bust for the Greek Freak. In this game against Cleveland, Giannis made 14 baskets in the paint en route to a 44-point night and a 14-for-19 clip. He never shot a three but made 16-of-21 charities.

The pattern becomes clear when we examine Antetokounmpo’s value. His FG% makes a huge difference and unlike high-volume players, his shooting percentages do not suffer as much. Again, his excellent FG% makes this game a class of its own as Giannis shot 57% from the floor on the way to 27 points, plus 18 rebounds, and 5 steals. He added four assists and two blocks for good measure.

Giannis does not shoot (and make) a lot of threes but he made 3 of 5 on this one on top of 43 points and 18 rebounds. 64% from the floor is just icing on the cake. A pretty nice icing, I might add.

Nikola Jokic got the other one (and the more superior outing) but 87% from the floor? Damn.

One word to describe Harris is SOLID. He won’t produce eye-popping numbers but he doesn’t hurt you anywhere either. He is averaging career-highs in scoring (20.8), rebounds (8.1), and percentages (50/43/89 shooting splits).

The holes of Harris’ fantasy games are the defensive stats (0.8 steals and 0.4 blocks per game) but all of the other numbers are enough to keep him at late second round value. ESPN Player Rater has Harris at No. 19 while Yahoo pegs him at 21.

a.) The ONLY game with at least 32 points, nine rebounds, six treys made, and 57% shooting from the floor.

Again, nothing spectacular but solid all around. Well, the six three-pointers are pretty stellar but you get the point. Harris did not add defensive stats on this one and not too many throws (made his only two attempts), but he had only 1 TO.

SOLID, SOLID, SOLID. No other supporting stats other than a dime and a steal BUT he also had no turnovers. This stat line is a force in points leagues and in daily fantasy but roto owners do appreciate the efficiency.

This is actually a pretty elite company with Antetokounmpo, Anthony Davis, Nikola Vucevic, Nikola Jokic, and Karl-Anthony Towns all having similar stat lines but Harris had two of such outings while the others have one each.

Griffin is basically the anti-Tobias Harris, doing everything with flair but with noticeably less efficiency. BG is averaging a career-best 25.6 points, 8.3 rebounds, 5.3 assists, 0.8 steals, and 0.5 blocks. The percentages, however, are not that great especially because he chucks up almost 7 three-point attempts a game. Griffin is shooting only 48% from the field and commits almost four TOs a night.

Considering all his numbers, ESPN has him at No. 24 on the Player Rater while Yahoo has him at 35. The one positive that we can get out of Griffin’s season, however, is that he missed only 2 out of a possible 39 so far.

With Griffin, you have to learn to accept the good with the bad. He had a triple-double in a loss to Milwaukee (19-10-11) but also committed 10 TO’s and shot a horrible 30% from the floor. And he only had a steal to atone for that?

b.) One of only TWO games with at least 44 points, eight rebounds, three steals, and 5 three-pointers made.

James Harden has the other one but Griffin’s was also very impressive as it came over his former Clippers team. It’s a revenge game at its finest as Griff also added five assists, a block, and made 13 of 14 FTs.

c.) The ONLY game with at least 50 points, 14 rebounds, six assists, and five treys made.

It was easily the best game of Griffin’s season but familiar woes reared its ugly head. He only shot 5-for-11 from the line and has virtually no other supporting stats except for a block. At least he only had 1 TO.

Pascal Siakam as an early fourth round value seems like a laughable idea at the beginning of the season but here he is. The third-year power forward from Cameroon has immensely outplayed his ADP (111 at ESPN), tallying 15 points, 6.6 rebounds, 2.8 assists, a steal, and 0.7 blocks per outing with great percentages. He is shooting over 57% from the floor and 77% from the line. While not great, he has also improved his three-point shooting from 22% last year to 34% this season.

a.) The ONLY game with at least 30 points, two blocks, and three treys made while shooting 73% from the field.

Siakam is a fourth option at best for the Toronto Raptors but his improvement allows him to have performances such as this one. Aside from the line mentioned above, he also had four rebounds, three assists, and zero turnovers.

Points, check. Rebounds, check. Percentages, check. Aside from the fact that he has no defensive stats, that’s not bad from a guy who’s supposed to fill the last roster spot of your fantasy team.

The other one who has such a game is — you wouldn’t have guessed it– Larry Nance, Jr. LNJ’s outing was the superior one but then again, getting this type of production from someone you probably drafted in the 10th round is just GOLD!

OK, JJJ is included here because of potential but it’s not like he’s not producing. Although other true PFs like Nikola Mirotic and Lauri Markannen deserve a mention, Jackson has still not missed any games while showing diverse production as a rookie. He has averaged 13.4 points, 4.6 rebounds, 1.2 assists, a steal, 1.5 blocks, and 0.8 treys a game while shooting 53% from the field and 78% from the line. That’s comparable to Anthony Davis’ rookie averages and certainly better than Giannis’.

That’s really impressive given the Grizzlies’ rigid and slow-paced offensive structure that revolves around its veterans.

That came in a loss but the 5-block output was already his second in his first 12 games.

b.) The only ROOKIE to have at least 36 points, eight rebounds, 13 FGs made, and three treys made in a game this season.

The last first-year guy to do it was Zach Lavine in 2015 and before that was Steph Curry in 2010.

c.) The ONLY player in NBA history with at least 16 points, seven blocks, and three treys made while shooting a perfect 100% from the field in a game.

Yep, I know. Impressive, right? The kid is going to be statistically special. Thanks, Basketball-Reference.