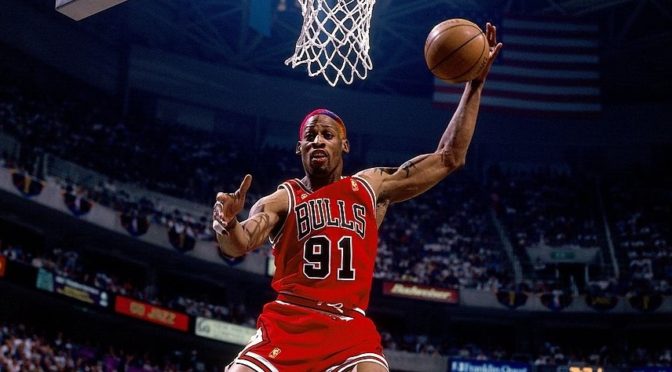 Eighty-two games for each of the 30 teams in a normal NBA season assures us that we will get to encounter some of the oddest stat lines in the history of basketball every now and then. Let’s take a look at some of weirdest NBA stat lines of all time:

Elmore Smith may have the official record for most blocks in a game with 17 (in 1973) but Manute Bol recorded two 15-block performances during his career.

In typical Manute fashion, he offered little else outside of his defensive paint presence, scoring 4 points and 4 rebounds in his first one on Jan. 25, 1986. In his second 15-block outing, he got himself a triple double with 10 points and 19 rebounds.

37 points are nice and all but if you got Allan Houston in 2000 for your fantasy team, you would have hoped he has done a little bit more than putting the ball in the basket. Instead, the sharpshooter blanked all major categories (well, he had 4 turnovers) en route to the win.

When the Wizards picked Vesely sixth overall in 2011, it caught everyone by surprise. His whole NBA career is basically a mist, playing a total of 162 games averaging 3.6 points and 3.5 rebounds in a little over 15 minutes.

On December 28, 2013, Vesely must have had an appointment (or a date) and decided he’ll give all of his six fouls in eight minutes and 16 seconds of action. That’s not the NBA record, Bubba Wells got it in the bag (fouled out in 3 minutes) but it just shows you how much of a waste that No. 6 turned out to be.

You probably don’t remember Kenny Walker’s time with the Washington Bullets, but who does? Nobody will if you played 12 minutes and literally did nothing: 0 points, 0 rebounds, 0 assists, 0 steals, 0 blocks, 0 fouls, and 0 turnovers.

Kenyon Martin was a big reason why the Nets went to back-to-back NBA Finals trips in 2002 and 2003 but he may also be one of the biggest reasons why they came out empty-handed both times.

With their backs against the wall in Game 6 of the 2003 Finals, Martin went 3-for-23 from the field (13%) in 39 minutes of play. Although he had 10 rebounds and 2 blocks, man, nobody wins a game, much less in the NBA Finals, shooting bricks like that.

How could you register a stat without playing a single second? It’s simple. Just do what Rasual Butler did.

Butler was inserted into the lineup with his Raptors down 92-93 to the Lakers and was called for a 5-second violation. He was subbed out of the game immediately and since the clock did not start, he technically did not play a single second. The turnover unfortunately should be counted, so it’s stuck on his game stats.

On October 22, 2010, as a member of the Milwaukee Bucks, Corey Maggette played 10 minutes against Minnesota and got to the line 20 times, making 17.

James Harden would have been so proud.

Rip has had a decent career and a few All-Star selections under his belt (and an NBA championship) but there’s nothing decent and All-Star-ish about the January 6, 2005 game he played against Memphis.

Hamilton missed all 10 of his FG attempts but made all 14 of his free throws en route to a 22-point thumping at the hands of the Grizzlies.

On one of these triple-double outings (Oct. 2, 2017 vs Memphis), Green had 12 rebounds, 10 assists, and a franchise-record 10 steals with only four points (plus 5 blocks). I mean, he could have had a quadruple-double if he chose to be a little greedy. He attempted only six shots from the field and made two in under 38 minutes of play.

Hakeem Olajuwon holds the NBA record for most points without attempting a single free throw. He did that in 1997 against the visiting Nuggets where he scored 48 points on a 24-for-40 clip but did not make any trips to the line.

I don’t know if there’s a king of weird stat lines but if there is one, it is Dennis Rodman. Nicknamed The Worm, Rodman had SEVEN games in which he grabbed at least 20 rebounds and not score a single point.