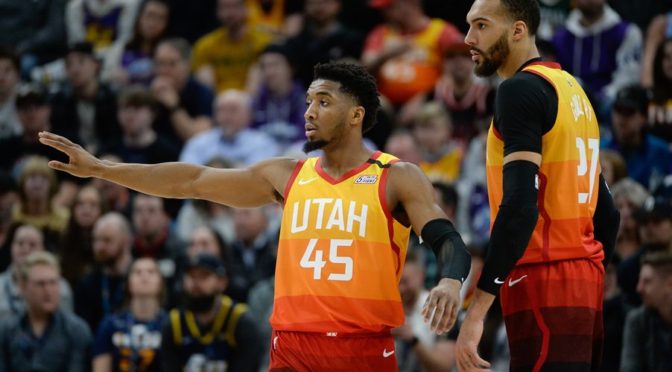 It sucks but the NBA made the right call. Adam Silver announced Wednesday night that the league will suspend games until further notice, at least until it has determined the next steps to combat COVID-19. Two players, namely Rudy Gobert and Donovan Mitchell, were tested positive for the virus. Both play for the Utah Jazz.

Gobert has tested positive on Wednesday night while Mitchell confirmed that he has contracted the virus on Thursday, on his Instagram page.

Thanks to everyone who has been reaching out since hearing the news about my positive test. We are all learning more about the seriousness of this situation and hopefully people can continue to educate themselves and realize that they need to behave responsibly both for their own health and for the well being of those around them. I appreciate the authorities in Oklahoma who were helpful with the testing process and everyone from the @utahjazz who have been so supportive. I am going to keep following the advice of our medical staff and hope that we can all come together and be there for each other and our neighbors who need our help❤️🕷

Here are a rundown of the key things we need to know:

Suspension is not the same as cancellation.

On Thursday, Silver announced it’s going to be “at least a month.”

It is still possible that the season will be cancelled altogether. After all, everyone’s health and safety is something bigger than basketball. However, the impression is that the owners still want to finish the season, even if it means finishing it until late July or August.

Sources: Lakers players came away from conference call with GM Rob Pelonka, Coach Frank Vogel that NBA owners want to finish regular and postseason, even if goes to late June, July or August.

2.) It’s possible there will be no games for over a month.

Again, this sucks but it’s ultimately about everyone’s safety. No games for at least a month is better than no games at all.

Researchers say the incubation period of the corona virus can take up to two weeks. That means people right now could be positive and it’s just hard to determine who is sick and who’s not.

3.) This suspension is ABSOLUTELY NECESSARY!

If only two Jazz players have tested positive for the virus, why put the whole league in lockdown? Well, it’s not that simple. According to StatMuse, in just a span of five days, all 300-plus NBA players could have been exposed!

All 30 NBA teams can be connected in just the last 5 days.

The NBA made the right decision to suspend this season. pic.twitter.com/jUy3X5zwTj

As of now, the teams that the Jazz have played in the last 10 days (Toronto Raptors, Cleveland Cavaliers, New York Knicks, Boston Celtics and Detroit Pistons) have been told to self-quarantine.

In addition to the teams Gobert and Mitchell have played against, there are the team staff, the media, and whoever they came in contact with. Some, like Mitchell, is in the habit of going into local high school basketball gyms to privately work out so the scope of the spread could be much wider than we could imagine.

4.) Limiting large gatherings is an effective way to combat the spread of the virus.

In cases like this, the goal is simply to limit the spread of the virus. It gives the healthcare system enough time to administer cure to those ailing now while at least easing the risk of more infections.

Amidst the scare and all of that, there are good news that kind of balance everything out.

The Cleveland Cavaliers have announced that they will still be paying the Quicken Loans stadium staff like it was a game day. Solid move! And who’s saying Kevin Love ain’t clutch? K-Love has pledged $100,000 to the salaries of the staff to make sure they won’t be lacking amidst the crisis.

Everyone reacts differently to stressful situations. And the fear and anxiety resulting from the recent outbreak of COVID-19 can be extremely overwhelming. Through the game of basketball, we've been able to address major issues and stand together as a progressive league that cares about the players, the fans, and the communities where we work. I'm concerned about the level of anxiety that everyone is feeling and that is why I'm committing $100,000 through the @KevinLoveFund in support of the @Cavs arena and support staff that had a sudden life shift due to the suspension of the NBA season. I hope that during this time of crisis, others will join me in supporting our communities. Pandemics are not just a medical phenomenon. They affect individuals and society on so many levels, with stigma and xenophobia being just two aspects of the impact of a pandemic outbreak. It's important to know that those with a mental illness may be vulnerable to the effects of widespread panic and threat. Be kind to one another. Be understanding of their fears, regardless if you don't feel the same. Be safe and make informed decisions during this time. And I encourage everyone to take care of themselves and to reach out to others in need — whether that means supporting your local charities that are canceling events, or checking in on your colleagues and family.

Mark Cuban‘s Mavericks and Vivek Ranadive‘s Kings appear to be heading that same direction, while the Pistons and Hawks employees are also going to get paid no matter what. I’m sure more teams will follow suit.

If indeed the season extends up until July or August, it will have huge effect on things such as the draft, free agency, Summer League, etc., as pointed out by Zach Lowe. To me, it will present challenges, nothing as formidable, or seemingly insurmountable, like the possible outbreak of the virus. It’s a fallen domino, but hardly the biggest domino to fall.