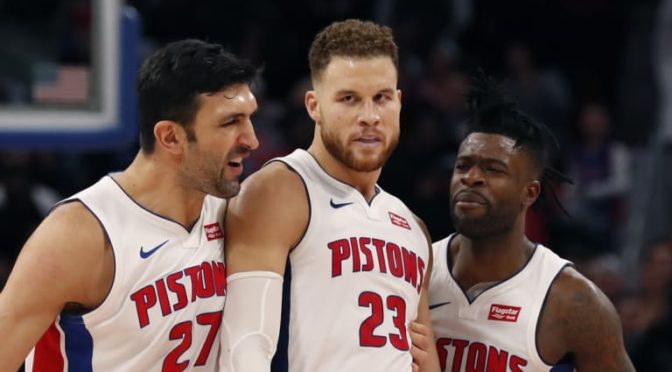 Blake Griffin showed that he can still dominate an NBA basketball game. Griffin scored a career high 50 points, including the game winning layup and 1 in OT to win the game. Blake had 14 rebounds to go along with his 50 points and he added 6 assists. Heading into the season I didn’t have the Pistons making the playoffs, sample size is too small to change my mind, but they have been playing well enough to win.

The Pistons are 3-0 under new coach Dwane Casey and Griffin is leading the league in scoring at 36.3 PPG and he is averaging 11 boards. Every game they’ve played had been close; 103-100 over the Nets, 118-116 over the Bulls and 133-132 over the Sixers. This team is could easily be 0-3 with a few unlucky bounces, but they have been able close out games at the end. Pistons have Griffin and Drummond, but I’m not sure how far a team can go with Reggie Jackson as their third best player.

If Blake stays healthy and Drummond is they same double double machine as last year, I think Casey might be able to take this Pistons team to the Playoff

The Nuggets are in 1st Place

The Nuggets were a really fun team to watch last season and missed out on the playoffs to Minnesota on the last game of the regular season. Denver drafted Michael Porter Jr., who may sit out the entire season, and they brought in Isaiah Thomas to come off the bench. The Nuggets didn’t make many moves in the offseason but they have come out on fire to start the season.

Denver is 4-0 and it has been Nikola Jokic leading the way. Nikola had an insane triple double against Phoenix, he didn’t miss a shot and had 0 turnovers. He leads the team in points, rebounds, assists and steals, also 3rd in blocks. 5 Nuggets are averaging double digits, Lead by Jokic with 23.3 and Gary Harris at 21 per game, and they are one of only 2 teams to hold opponents under 100 points this year. I’m not saying they have a chance at knocking off the Warriors, Anthony Davis was only able to take one game from them in last years playoffs and Jokic will be taking on a Golden State team with Boogie Cousins.

Mike Malone should get some looks for Coach of the Year. Going from missing the playoffs to being a potential 2nd or 3rd seed in the West is a great improvement.

With Chris Paul suspended and Brandon knight injured, the Rockets are left with Harden, Gordon and MCW. Rotowire has MCW starting at PG and he is only $3,700. Carter-Williams played well in the preseason but has played sparingly early into this season. The increased minutes as a starter makes MCW a steal.

I put the Nets into the same 5 team group the Nets are in that will fight it out for the last 3 playoff spots win the East, to get there they need to win games against teams like the Cavs. Cleveland is 0-3 and are giving up the most points of any team in the East, opponents are torching them for 126.7 points a game. LeVert is averaging 25 points a game, 10 more than Spencer Dinwiddie who is second, and has lead the Nets in scoring in every game they have played this season. DraftKings has LeVert listed at $6,800, seems kind of low for what he has done so far this season.

The Lakers are 0-3 and they have given up the most points in the league, giving up 132 points a game. I like Kuzma tonight, he is getting the start at PF, LeBron is playing SF because of the Ingram suspension. Kuzma’s salary is HUGELY inflated, jumping from $5,500 against the Spurs to $6,900 tonight.

McGruder has been great for the Heat in the first 3 games of the season. He is averaging close to 35 FPPG and he is playing 35 minutes a game. He is still only $4,900, that is a very low salary for a player getting those minutes and putting up those fantasy numbers. McGruder is playing against Tim Hardaway Jr. tonight, Hardaway is averaging 39 FPPG and he is going for 6,800. Getting good value with McGruder.

These 4 lower salary guys will free up some cash to go after 1 or 2 of the big guys. Harden/LeBron/Giannis/Embiid are $10,000+, Curry/Durant/Kawhi/Kemba/Booker are all between $8,300-$9,800, combine two from these groups with the bargain picks I suggested and you should have a pretty good base to build the rest of your roster.