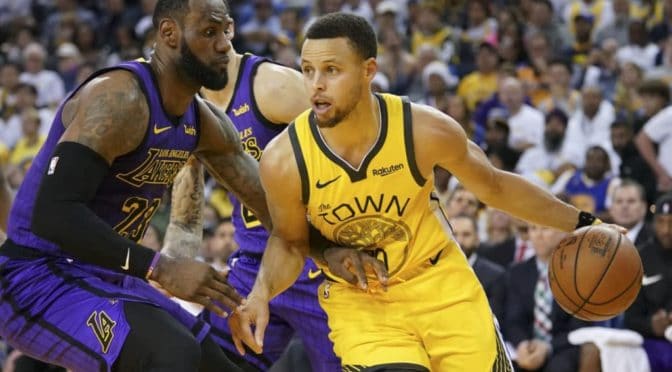 Who has the most rings in the NBA? What do Bill Russell, Michael Jordan, Tom Heinsohn, Robert Horry, and Steve Kerr have in common? Well, those guys have the most rings in NBA history.  Well, if you’re a student of the game, you may have known quite a bit of them. If you’re new to basketball, you may not have the slightest idea who they were. You probably don’t care because, after all, they are all retired. So why don’t we get our recent history right and rank the 10 active players who END_OF_DOCUMENT_TOKEN_TO_BE_REPLACED

If anybody has a crazier series in mind than the 2016 NBA Finals, I'd accuse him of lying. Quite literally, this series has enough twists and turns that would make the Paso de los Caracoles proud.

In an advanced celebration of what could be the craziest game tomorrow, here are 5 more incredible stats to delve in before the NBA Finals Game 7:
1. 610

Both teams' aggregate scores after SIX games. Game 7 is literally a deciding game, both for the number of wins and total aggregate scores.
2. END_OF_DOCUMENT_TOKEN_TO_BE_REPLACED

The Oklahoma City Thunder landing the heavier punches through the first four games of the Western Conference Finals is somewhat a surprise. But the Golden State Warriors coming back from a 1-3 hole is just as, or even more, surprising.
Here are the 3 things we learned from that helluva series:

1. Makes me realize how special a player Kobe Bryant is.

To say the Golden State Warriors is having a bad series against the OKC Thunder is an understatement. It seems like the Thunder is beating the yellow legion to every lose ball, looks tougher, and certainly hungrier than the defending champs.
However, the Warriors managed to survive Game 5 at home and now faces a tall task of trying to salvage their season. No, 73-9 don't mean a thing without the ring.
As hard as that can be,  team as good as the Warriors, no matter how flustered they were, always END_OF_DOCUMENT_TOKEN_TO_BE_REPLACED

With all the sidelights in the first half of the 2015-16 NBA season, the second chapter promises to be as lively, if not more.
It appears to be no stopping the Golden State Warriors but a San Antonio Spurs team with Tim Duncan in the middle will be a different beast if they ever meet again in Texas. The Los Angeles Clippers is definitely playing very well without Blake Griffin and rumor has it the Clippers management are looking to dump Blake to Colorado in exchange for Kenneth Faried, Danilo Gallinari, END_OF_DOCUMENT_TOKEN_TO_BE_REPLACED

As far as statistics is concerned, the 2015 NBA MVP is head and shoulders above the rest. He will carry your team single-handedly in multiple categories, namely scoring (30.1 PPG), 3PM (4.9), FT% (91.1% on almost SIX attempts), and even contributes on other stuff like rebounds (5.4), assists END_OF_DOCUMENT_TOKEN_TO_BE_REPLACED

Some ridiculous stats of the day for you to delve in...
1. The San Antonio Spurs lost tonight to the Houston Rockets and a 40.9% clip from the floor did not help, but few have been better historically than this bunch.
Through the first 30 games of the season, the Spurs is second all-time in points differential.

San Antonio Spurs... pic.twitter.com/0Cw2w9xRZG
— NBA Günlükleri (@NBAGunlukleri) December 24, 2015
As you can see, four of those teams won the championship the same year so we END_OF_DOCUMENT_TOKEN_TO_BE_REPLACED