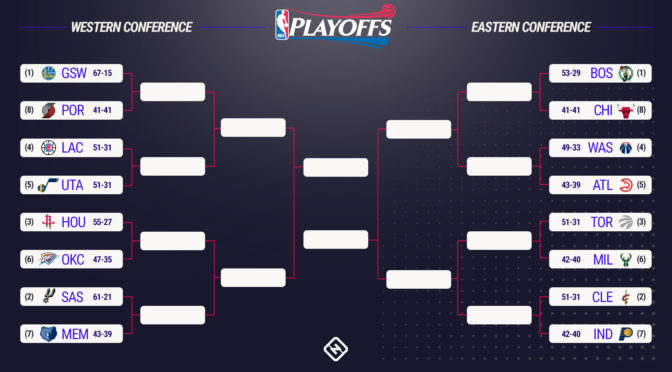 The NBA playoffs are here so it’s time to sound like an idiot again and predict the winners of the first round. You know what they have said about this year’s playoffs– that it’s only going to be a collision course between the Cleveland Cavaliers and the Golden State Warriors. While that conclusion makes sense, we cannot be absolutely sure because anything can happen– whether it’s injuries (hope not) or just simply one team outplaying either one of the favorites.

So before we get carried away and name a champion, let’s get the Round 1 predictions rolling first, shall we?

OK, I don’t want to call Damian Lillard a liar with his “Blazers in 6” prediction but I don’t think someone outside the city of Portland honestly believes they can pull this off. Not even Dame’s mom could have that much faith in him. Uh-uh.

The Blazers lost all four matchups this season by an average margin of 19.5 points. Sure, the last one was a 113-111 outing but Stephen Curry was inactive which means Portland should have won but didn’t.

Prediction: Warriors in 5 (and I’m being kind)

This is where my “upset” feels start but apparently not enough to call this one for the Grizzlies. The Spurs are too complete of a team to lose in the first round this year although they did split the season series at 2-apiece. Kawhi Leonard will stop someone but the Grizzlies won’t return the favor. It’s as simple as that.

I got the feeling Westbrook and Harden will use this series as an MVP campaign type of thing (although that shouldn’t be the case). OKC drew first blood while Houston swept the last three and that says a lot.

Both teams appear to have someone who can limit these superstars one way or another (Patrick Beverley for Westbrook and Andre Roberson for Harden) but at this point, Mike D’Antoni has too many playmakers and shooters at his disposal. The Thunder is actually top 10 in defensive rating and the No. 1 rebounding team in the league but that should be about it. Houston has only scored less than a hundred points five times this season and none of them are against Oklahoma City.

A battle of the top-4 offense vs the top-3 defense (per 100 possessions), the Clippers-Jazz series, in my opinion, most interesting first-round matchup in the West. The Jazz doesn’t have any superstars but I think they still have a clear go-to guy in Gordon Hayward. What they don’t have is playoff experience and it could prove to be their undoing in the long run.

Recent history is favoring the Jazz, though, if you like this kind of things.

Chicago has plenty of playoff experience for an 8-seed with 292 playoff games between Rajon Rondo, Dwyane Wade, and Jimmy Butler (and 4 championships between Rondo and Wade, I may add). Boston, on the other hand, might be the least dominant No. 1 seed in a while.

That said, the Bulls can definitely surprise the Celtics, who prove to have a more cohesive unit and better coaching in the regular season. I think this may go two different ways: Series goes to Boston in 5 or 6 but if Chicago manages to win Game 6, they might pull off a Game 7 win.

However, for the final prediction: I’ll go Bulls in 7

Really? Cavs in 4 and plenty of rest. Next!

Toronto is top 10 in both offensive and defensive rating so they should have the edge over the younger Bucks. That doesn’t mean it will be easy pickings though. If Matthew Dellavedova can wear down Kyle Lowry, the Bucks could give the Raptors a run for their money.

This is where the seedings get a little bit tricky because from where I am, the Hawks are NOT on the Wizards’ level. Washington is SIX games above the Hawks and could easily be the No. 3 seed. Atlanta, on the other hand, has struggled to find its offensive identity (27th in offensive rating) to go with its elite defense (4th in defensive rating) and finished the last 22 games with a 9-13 record.