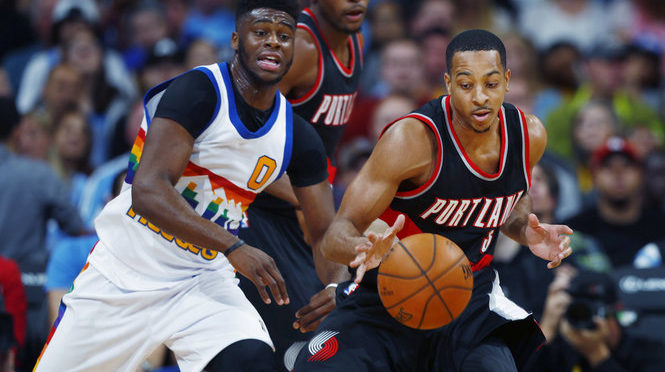 The price tag is heavy and so is the production. Boogie is averaging 52.5 fantasy points in the last six games and the last time he faced Portland, he had one blown-off mouthpiece, one angry interview, and 83.5 fantasy points. Go figure.

The Blazers are already without Damian Lillard so they need every ounce of CJ’s production to get out of their slump. The last time he met the Kings, McCollum had 46.5 points, his highest production in the last nine games.

The Kings-Blazers matchup is a fantasy goldmine so it only make sense to concentrate on productive players between the two squads. Plumlee is quietly very solid this season, and leads all the Centers and Center/Forwards in total assists. I can’t say enough about how bad these teams are defensively (which is good for fantasy purposes) and I just don’t see anyone stopping somebody on either ends of the court. Again, the last time these two squads met, Plumlee almost had 60 fantasy points!

Porter just had a 54.8-FP game against a decent Milwaukee Bucks defense. Opposite the Pacers, he might even do more. Or if he simply replicates the 36.75-FP performance he had against Indiana in December 19, hey, who am I to complain?

Mudiay is up-and-down so what did the 14.5-FP production meant? OK, maybe I’m putting more faith than needed here but Mudiay plays a lot better than home than on the road, with a remarkable 10-fantasy point difference. They’ll be playing in Mile High City this Wednesday against Minnesota, the league’s worst in defending point guards so I’ll take Mudiay and his price tag.

I’d probably take a long look at TJ Warren but he will be up against Kawhi Leonard so I’ll probably pass and take Mirotic here. Mirotic, for the first time in forever, has strung SIX solid games in succession, which culminated in a 20-point, 7-rebound, performance against Indiana (30.25 fantasy points). Brooklyn is another weak defensive team so I bet he can make it to SEVEN.

Note: All stats and salaries are from DraftKings.com.