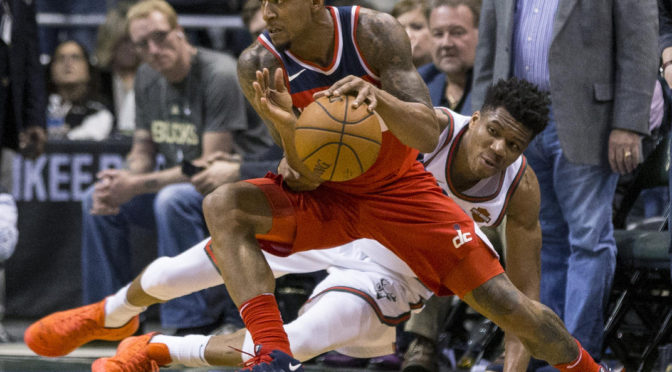 Probably the easiest decision that you’ll make and the best one as well. Greek Freak has just recorded a triple-double and shows no signs of slowing down.

The top choices this Tuesday boil down to Giannis, Damian Lillard, John Wall, and Kemba Walker but Antetokounmpo is fantasy basketball’s surest thing right now with averages of 26.1 points, 13.9 rebounds, 5.9 assists, a steal, and 1.4 blocks. If he could just cut down on the 5 turnovers a night, I’ll be ready to crown him as the best despite the lack of 3-point shooting.

Levert has established himself as the top dog in Brooklyn and even coach Kenny Atkinson said the organization is “all in” with the former Michigan Wolverine. He is averaging 22.7 points, 5 rebounds, 3.3 assists, 2 treys, and 3 steals in the last 3 games.

The Wizards are in disarray as a team but individually, Bradley Beal’s play is still superb.  He has registered an average of 22 points, 4.3 rebounds, 4.7 assists, 1 steal, 2.3 blocks and 3 treys made over his past 3 games.

Isaiah Canaan, PG, Phoenix Suns– Canaan seems to have the upper hand right now over Elie Okobo as the Suns’ starting PG and may have a favorable matchup against Brooklyn. He is averaging 16 points a game over the past two but all of the other stats leave a lot to be desired.

Malik Monk, SG, Charlotte Hornets– Monk has been playing well as of late averaging 19 points and 2.7 assists over the last 3 games and draining 10 treys during that span.

DeAndre Bembry, SF, Atlanta Hawks– Nothing comes out at you regarding Bembry’s numbers but he plays hard, does everything well, and consistently plays minutes in the low 20’s.