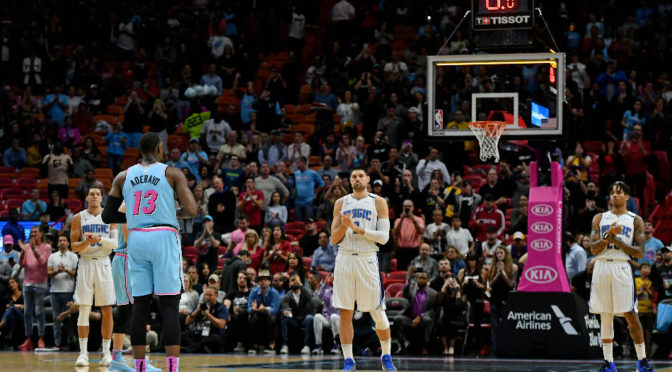 The last time I did a value picks article, I broke my streak of consecutive flame-outs at the stud department. (Bradley Beal and Lonzo Ball both went off for around 50 FP.) Bad news is, my prediction on Steven Adams and Montrezl Harrell were off with both guys churning out subpar performances against each other. It was so bad I’m not inclined to show their stats from March 3rd.

Damion Lee somehow managed to disappoint me but Harry Giles III was pretty solid– going for 13 points and six rebounds plus extras.

Here are my suggestions for a 10-game March 6:

I’m quite sad seeing Jayson Tatum and Kristaps Porzingis up there in the high echelon when it comes to salary but as mentioned, 10 games will provide us a lot of options in the studs department.

One such option is Aaron Gordon, whose Magic will be facing the Timberwolves Friday night. Gordon has already shown Minnesota what he can do, dropping a triple-double against them on Feb. 28th. Minnesota is allowing 117.3 points to opponents in February, the fourth-worst in the league for the month. I expect Gordon, who is worth $8,600 at DK and #33 at Yahoo, to rack up some useful stats en route to a 40-FP night.

I will also get Bam Adebayo to partner with Gordon. Even though Bam has not been the 50-60 FP guy from earlier this season, a matchup with one of the league’s fastest teams (Pelicans) should do something for his value. Still, Adebayo is averaging over 43 FP at DK over the past six games.

Without Jaylen Brown and Gordon Hayward, Marcus Smart ($6,500 at DK, $32 at Yahoo) is a shoo-in at DraftKings although he is a coin-toss case at Yahoo because of his salary. That’s too high for my taste while I can get Lonzo Ball or Khris Middleton or Caris LeVert at that price.

At Yahoo, Shai Gilgeous-Alexander‘s 27-dollar salary is just right at this spot. SGA have struggled a little bit against the top teams such as Milwaukee and the Clippers but has been giving lesser teams the business all season long, Last time I checked, New York is one of them LESSER teams.

Terrence Ross ($5,700 at DK, $20 at Yahoo) is heating up at just the right time now with over 20 points in seven of the last 10 outings. As mentioned, the Wolves have not stopped anyone since George Bush was in office so expect Ross and the Magic to capitalize on that.

Another sub-5000 player that’s completely going under the radar is DeAndre Hunter of the Hawks. Hunter is averaging 28.4 FP at FK in the last five games and will get his fair share against another poor defensive team in the Wizards. At Yahoo, he is even cheaper at $15, so take a closer look at him in both platforms.