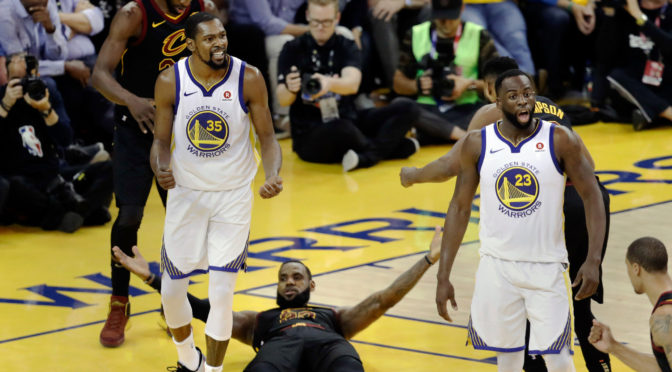 Basically, nobody could touch LeBron in Game 1 as he went off for a playoff career-high 51 points. But KD, Bron’s primary defender, allowed him to score 30 points on 10-for-15 shooting.

To be fair to KD, Draymond Green didn’t do a better job, either. Green was LeBron’s primary defender in eight possessions, and James scored eight points on 4-for-6 shooting.

Apparently, the Dubs need Iggy real quick or LeBron will probably average 45 in this series.

There was a fair amount of confusion regarding the play below.

Offensive foul or nah? You make the call pic.twitter.com/8szyxhq6Fw

In my opinion, the rule that allowed officials to review that play is HORRIBLE but they ultimately got that call right. But did you know, that same type of call happened before– three times in the last 14 months, to be exact.

Mike Prada of SBNation did a fine job digging those three instances the weird overturning of calls happened. Here they are:

2.) Oct. 26, 2017, the game where Austin Rivers broke his finger. Originally called a block but was later changed to a charge.

3.) In the 2015-16 season, when the Warriors were pushing for the all-time regular season record for wins.

Remember the Grandma purse (or bag, however you want to call it) LeBron had with him when he decided to bolt off the press conference after a stubborn reporter kept asking him JR questions?

We all know what’s coming to TT when he fouled Shaun Livingston and shoved a ball on Draymond’s face at the tail end of overtime in Game 1 but the league cut him some slack by NOT suspending him and downgrading the foul from a Flagrant 2 to 1.

J.R. Smith’s brain fart Thursday is NOT the only time a blunder of that magnitude happened in an NBA finals game. In Game 2 of the 1984 championship series against bitter rivals Boston Celtics, Magic Johnson inexplicably dribbled out the clock, game tied with 13 seconds remaining.

Boston went on to win on 7 and the nickname “Tragic” Johnson was born.

And yeah, Derek Harper also did it in the same post-season as Johnson’s “tragic” mistake. Coincidentally, it was the conference semifinals against Magic and the Lakers.