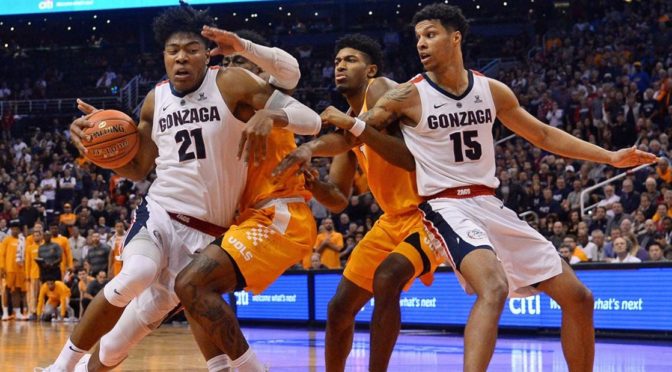 Rookies are not generally expected to make an impact right off the bat, but there are some that may need to break the mold and contribute right away. Here are 5 rookies who may just do that and are names to watch in the upcoming fantasy basketball drafts.

OK, so let’s get the most obvious one out of the way. Nobody drafts the best prospect since Anthony Davis and make him sit on the bench, right?

Williamson is as ready as any 18-year-old making the jump in the pros and is projected to be among the rookie leaders in points, rebounds, steals, and blocks. If only highlight reel dunks score much higher in fantasy, Zion could be a top-5 pick right away. He has the potential to be a 20-10 guy from the opening tip and his insane penchant for help defense will allow him to have healthy steals and blocks numbers, with sporadic long-range makes here and there.

The Knicks are literally anemic on offense last season, finishing as the third-worst team in terms of points per game. Barrett, the No. 3 overall pick, is no savior but he will have his chances– plenty of them– in New York.

In college, Barrett averaged 22.6 points, 7.6 rebounds, and 4.3 assists. He is a fiery competitor and has natural scoring instincts, things that should translate well in the next level. Efficiency is something Barrett struggled with at Duke (30.8% from 3 on over SIX attempts and 66.5% from the FT line on SIX attempts) and that’s most likely going to be the case in the NBA. However, he’ll always be in the radar on points and DFS leagues and could still be a contributor to roto teams if you’re able to find someone to offset his deficiencies.

Morant will be given the keys to the franchise as soon as his first game on a Grizzlies uniform. That alone makes the Murray State product an early-round sleeper (think Round 3 to 4) in most formats especially roto.

He is both an outstanding facilitator and scorer (24.5 points and 10 assists per game) while making huge strides as a shooter. Morant will be a factor on shooting percentages because he is used to take a volume of shots on the field (16 a game this year) and at the FT line (over 8 a game). The steals and blocks numbers are not too shabby (combined 2.6) especially for a point guard but he could be error-prone, evidenced by the 5.2 turnover he commits a game.

Regardless of Morant’s shortcomings, he will have every opportunity and the green light to do whatever he wants and that could potentially make him the best fantasy basketball rookie in his draft class.

The WCC Player of the Year should fit right into Scott Brooks’ good graces simply because he can score.

Hachimura transformed into a real scoring threat by averaging just a shade under 20 in his junior season at Gonzaga. Although he could be a better rebounder for his size, he plays with such energy and passion, signs that he could be an average rebounder at the next level if he works on it.

The Wizards are painfully short on offensive options right now with John Wall out for the next season while Bobby Portis and Jabari Parker could go via free agency. Even one of them returns, Hachi is on line for minutes just basing on his insane efficiency alone (59% from the field and 64 TS%).

If you’re looking for specialists especially in the later rounds that can contribute right away, look no further than Cam Johnson. The Suns drafted Johnson 11th overall (some had him falling into the second round with a late first-round pick as his best case scenario) for his shooting and he definitely is the best shooter of the draft.

(Some other issues about Johnson is his age. He is already 23 and is currently the third-oldest player on the Suns roster. He also had injuries on both hips, causing other teams to red-flag Johnson out of the second round.)

The wiry forward makes 46% of his tried on almost six attempts at UNC and is pretty much a marksman even during his Pittsburgh days. That may be just the thing that Johnson is great but he is special in that category. In his whole college career, Johnson shot 48% on corner threes and 46% on NBA-range three-pointers. To put that into perspective, that accuracy is better than anyone in the NBA who has attempted at least SIX threes a game.

In order for Phoenix to open up things for Devin Booker and DeAndre Ayton, this guy should get good looks from the outside because more often than not, he is going to knock them down.