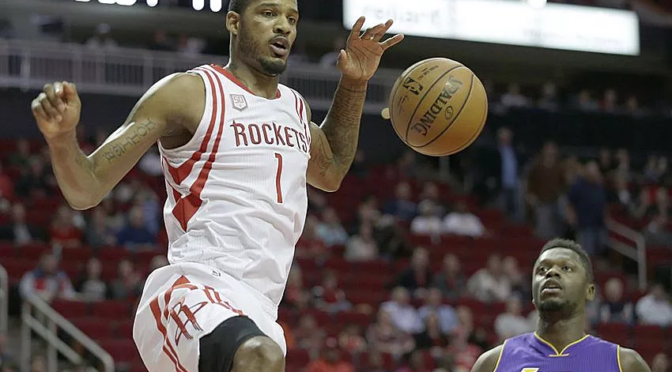 The trademark of a poor fantasy owner is impatience. It just happens well too often– his better players start out slow and starts to put them on the trading block. If you see someone like that in your league, you better watch out if one or more of these players are on his team and you may want to part some of your overachieving ones as well.

Ariza has been playing the worst basketball in his career in a decade. Here are his averages: 6.2 points, 4.5 points, 3.3 assists, and 1.5 steals while shooting 25% from the field including a woeful 19% from distance on 5.3 attempts. As bad as that looks, it can’t get really worse, can it? Ariza is shooting 35% from three (2.5 makes) throughout his career on top of 10 points, five rebounds, and about 43% from the floor.

So when you see an impatient owner itching to get rid of the Rockets small forward, don’t hesitate to nab him for the right price. And by “right” I mean “steal” price.

Ah, the curious case of Julius Randle. He was a mini-Draymond Green in terms of production but now that he’s relegated to the bench, he’s only averaging 19 minutes with his rebounding (from 8.6 to 5.3) and assists numbers (3.6 to 1.7) down from last year. So should you banish him to the waiver wire? By no means.

Randle is actually playing really well off the bench and what he lost in rebounds and numbers, he makes up for efficiency from the field and a solid 1 block per game. His PER is a team-high and his offensive and defensive rating are the highest he’s had in his career (113 OR, 99 DR). Besides, he is averaging 7 rebounds a game in the past four games after a brief role adjustment to begin the season. If you have JR, keep him if you can’t sell him high. If somebody’s dangling him, you should at least, consider.

Tobias Harris is averaging a career-high 20.5 points but he is doing most of that damage from the distance, not the most efficient shot in basketball. (He is making a career-best 2.6 makes in 6 attempts (43.8%)). He hasn’t done that for a full season before so something tells me this is more of a blip on the radar than anything else.

Paul Millsap is off to a slow start in the Mile High city but you know what they say: No other way to go but up!

Most of Millsap’s numbers are a little below what we are accustomed to seeing but one really atrocious aspect of his game to start the season is his clip from the field. The 4-time All-Star is shooting below 42% which explains why he’s only scoring at 14.2 a game. Once that shot starts falling, we are all gonna believe THIS never happened in the first place.

Porter’s ceiling, however, may always be limited because he is playing behind John Wall and Bradley Beal. His much-improved three-point shooting will make him want to shoot more, lowering his already low FTA (2.2) and will make his rebounding more spotty in the long run. His production based on ESPN’s Player Rater is in late Round 2 so if you can get someone like Kristaps Porzingis or Draymond Green, I say pull the trigger.