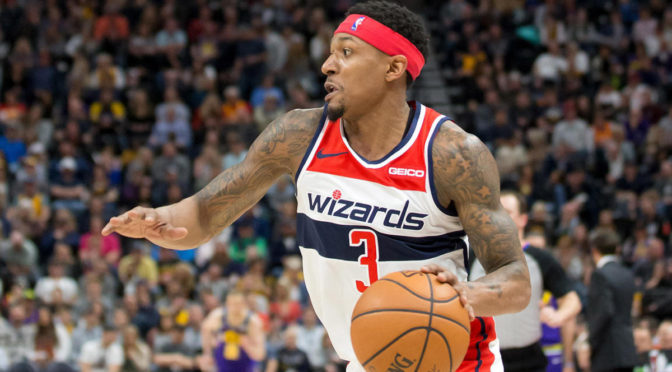 Siakam didn’t disappoint, not as many assists or rebounds as other nights but he added 2 blocks and a steal. Turner had a bad night on offense, his 3 blocks and 1 steal saved the pick from being a complete write off. Powell was one of 3 Raptors to score 20 points against the Magic, but he almost no fantasy points outside of those 20 points. I ended up using Tolliver and he had an acceptable 22.75 fantasy points. I didn’t use Sabonis and he had a typical Sabonis night, 25 points, 9 rebounds and 4 assists.

Saturday’s slate is a little smaller than the last two nights. Here are 3 players to build your DraftKings lineup around on this 4 game slate.

Beal has been on an absolute tear lately. He has scored 30+ points in 8 of the last 10 games, three of those games were 40+ point nights. He is shooting 47% from three over the past 10 games, which is a massive improvement from his 35% 3 point average on the year. He has an unstoppable midrange jumper and he can get to the line when he drives, he is firing on all cylinders with every weapon in his bag. $10,200 is the highest salary today but Beal is well worth the price tag.

This is the first time I am using Paul Millsap this season. He has scored over his fantasy average in the last 7 games but his salary hasn’t moved the last 4 games. $5,900 seems slightly low for the production he has had lately. Millsap is active on defense too, he had a 5 steal game earlier this week and followed that up with a 3 block/1 steal performance the next night.

I’ve used Hayes a few times this year, he is a good value pick. Hayes scored above his average in 4 of the last 5 games and his minutes have increased too. He is undervalued today, he was $4,900, $5,100 and $4,800 in the last 3 games. Bigs have been playing well against the Clippers lately, specifically against Zubac. Capela had a 19 rebound night and Theis had 14 when they played Boston. As long as Hayes stays out of foul trouble and plays the minutes he has been getting recently he will get his fantasy points.