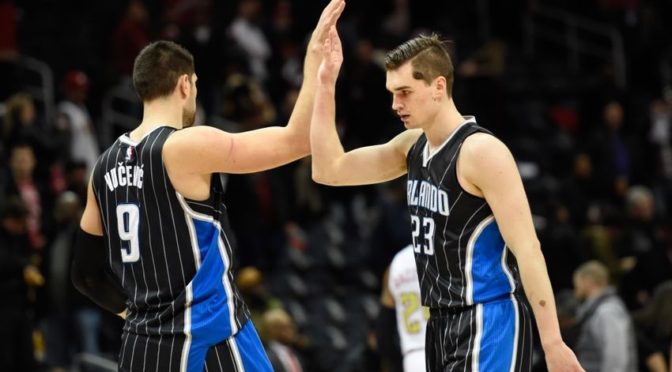 JR is No. 1 on this list for a reason. He will probably start Wednesday against the Houston Rockets with Brook Lopez nursing an ankle injury and that alone should net his fantasy points in the high 30’s. The Kentucky product is averaging 13.3 points, 6.3 rebounds. 2.5 assists, and 1.3 blocks in the past four games while only playing 26 minutes a night.

At long last, we had a Mario sighting in Orlando! Hezonja has alternated good and bad games in the past three, but the 28-point explosion the last time out is too much to pass on, especially at his salary. Over his past four, he’s averaged 14.0 points, 2.5 triples, 5.8 rebounds, 2.0 assists, 1.3 steals and 1.0 blocks.

CP3 has been messing around lately and it’s easy to see why the Rockets are still UNDEFEATED with him on active duty. At this point, you can make a case that he may even be a better pickup than Harden, with the Beard costing 900 bucks more. In the past six games, Paul is dropping insane numbers across the board– 24.7 points, 6.3 rebounds, 8 assists, 2.7 steals and over 3 treys a night.

Bazemore has been on fire lately, in case you haven’t noticed. He has reached over 40 fantasy points in three of the past six and is averaging a well-rounded 15 points, 5 rebounds, 5 assists, 1.3 steals, and 2.3 blocks a night over that span.

Vucevic is the second-highest paid center on this game day and I won’t be surprised if you’d choose, say, Clint Capela, over him but I don’t think there’s a surer thing in DFS right now than Vooch. He’s averaging career-highs in 3-pointers (1.5), blocks (1.2) and steals (1.1), and hitting at least 47.3 FP in eight of his last nine. During that span, he has three games of over 50 FP and two with over 60.

Note: All salaries and stats are from FanDuel.