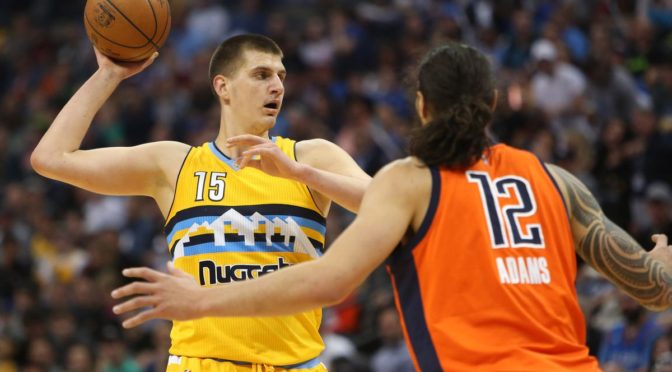 Owning Nikola Jokic in fantasy basketball is not for the faint of heart nor for the impatient. Joker is known in fantasy circles to be an ultra-slow starter, probably rounding up into form around December.

While he only averages around 45 fantasy points per game (that’s 15th in the entire league), he has not missed a game yet all season. That’s the reason why he has a total of 2,815 fantasy points, which would have ranked third behind James Harden and Trae Young.

Jokic’ iron man status no doubt vaults him in the top echelon in fantasy basketball but same can be said about his contributions across the board. The Serbian averages 20.2 points, 10.2 rebounds, 6.9 assists, 1.2 steals, and 0.7 blocks but his three-point shooting (71 total and 1.1 per game) sets him apart from his big man peers.

Here are The Joker’s 5 best statistical games of the season:

You know a Hawks game is coming, right? Well, that’s what you get if you’re lacking a defensive identity.

Anyway, in January 6, it’s around time Jokic gets his legs underneath him and Atlanta found out about it the hard way. He managed to torch them for 47 points, plus eight rebounds, five assists, two steals, and a block.

From a fantasy perspective: Jokic’s line totaled 73 fantasy points basing on the league’s official scoring system but he also managed to get his roto and category-based league owners hidden gems. He had ZERO turnovers for this game and also made four threes on a 64% clip from the floor.

2.) Triple Double in a loss

It’s a rare occurrence when Jokic had a triple-double and the Nuggets lose. It happened only three times out of 12 this season and this is probably his best game out of the three Ls.

The Serbian totaled 39 points, 10 rebounds, and 11 assists but lost by five points thanks to seven Pistons scoring in double figures. But that should not take away Jokic’s sterling fantasy performance, though.

From a fantasy perspective: Jokic did something in the vicinity of 80 FP in this game but not only did he bolster his owner’s chances in roto, he also raised hell in points leagues and DFS. Three steals, two blocks, 70% clip from the floor, and 86% from the line are just icing on the cake.

There was only one record of a 30-20 triple double in Basketball Reference and Nikola Jokic was responsible for it! The Nuggets did not take an L this time but won by three over Utah.

All in all, Jokic also had two steals against one turnover while shooting 58% from the floor against Rudy Gobert.

From a fantasy perspective: The only caveat in this game is Jokic did not connect on a three on two attempts. Other than that, it was a masterpiece especially in DFS where it probably went around 75 fantasy points.

In one of the more complete performances this season for Jokic, he punished the Blazers from all angles en route to a 28-point beatdown. It was over by the third quarter, when the Nuggets led by as much as 38.

From a fantasy perspective: If you’re playing DFS, you got to be wary of blowouts like this because your guy might just get less than 30 minutes and probably 30 FP. Not this time around. Jokic played 30 minutes all right but his 29-13-9 plus five stocks brought the total to around 69 FP. He made three treys in that game against four turnovers while also making all four FT attempts and 11-of-17 from the floor.

This is the seventh out of 12 triple-double performances of the season by Jokic and it was a thing of beauty. He let out his full bag of tricks– floaters in the lane, pick and pop, no-jump tip-ins, alley-oop passes– name it, the Joker have shown it.

From a fantasy perspective: Jokic only recorded one block as a defensive stat but other than that, who can complain against 60 fantasy points?