Kobe Bryant will have both of his jerseys (8 and 24) retired tonight at Staples Center, so in honor of the Black Mamba, let’s take a look back at EIGHT of his most impressive (but lesser-known) stats he recorded during his historic career.

Yep, we know all about the 81-point game– second-highest scoring performance ever. Blah Blah. Here’s what most people don’t know: That night, he had 2/3 of his team’s scoring output (and 36% of both team’s scoring output) and that game pushed his average 1.1 points over, which is ridiculous since it came just short of halfway through the season. He also shot a whopping 60.9% that night.

No, that’s not a dig on Kobe’s supposed inefficiency but in contrast, this is probably the single most amazing stat on this list. Kobe Bryant had 6 of the 14 60-point games in the last 21 years.

3. Most free throws made in a four-game playoff series 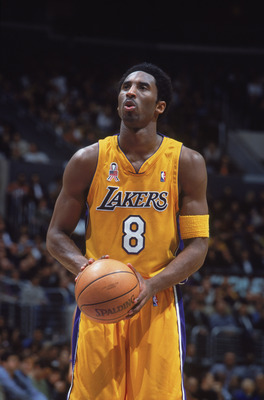 Lakers swept Sacramento in four games and the Mamba made 51 free throws through the duration of the series. He attempted a combined 38 in Games 3 and 4 alone.

Kobe Bryant is the only player to have scored 30,000 points and accumulate 6,000 assists in the history of the NBA. He will be followed by LeBron James in a month or so in that exclusive list, but still, that’s mighty impressive.

7. 40 Points Against Every Opponent

P.S. In his career, Michael Jordan did not score 40 against two teams, Toronto and Memphis. LeBron failed to so against the Clippers and the Rockets, though he has plenty of time to catch up.

That’s the estimated career earnings of Kobe, including bonuses and endorsements. According to Forbes, “the only athletes to earn more are in individual sports and include Tiger Woods, Michael Schumacher, and Floyd Mayweather.”

“I can’t believe you cheated on me for the last five years."

BASKETBALL 101: WHAT DOES A SHOOTING GUARD DO? 🏀