Coming into the NBA, most people would definitely want to play right away. Problem is, not everyone is Michael Jordan or LeBron James or Magic Johnson. Heck, even Kobe Bryant played behind Eddie Jones in his debut season.

However, the 2015-16 batch show a handful of prospects that should and could step right into the job. Some are luckily awarded with unhindered paths into the starting lineup while the others may still have to earn their stripes.

Either way, these NBA Rookies should start for their teams at some point next season and hopefully keep that job for the better.

Speaking of a clear lane to the starting lineup, Mudiay has got it in the bag. The only question in Mile High City right now is who will we see for the next four spots beside him.

Of course, it would be a mild surprise not to see Danilo Gallinari (if he’s healthy), Wilson Chandler (likewise), and Kenneth Faried in one of those slots but make no mistake about it, the franchise is giving Mudiay the key to the house party– RIGHT AWAY.

Mudiay is a big, athletic body very capable of running the point but the flaw to his game is his spotty shooting and sometimes questionable decision-making. However, nothing can’t be cured with minutes, right?

If we’re drafting for fantasy right now, I’m taking Mudiay as my first rookie off the board. And maybe, followed by this guy…

If you have just checked out the entirety of the Detroit Pistons as of today, you might have realized this soon: There’s nobody there at the 3-spot other than– you guessed it– Stanley Johnson.

It’s not a secret by now that Johnson is and will be a big part of Motor City immediate and long-term future. What’s not to like? He has that Ron Artest-like, 245-pound diesel of a body and like MWP, plays both ends of the floor like a madman but without the excess baggage.

Can anybody imagine what Artest would be like without all those crazy antics? Look at Stanley Johnson by March next year and you got your answer.

Anyone suggesting a Rudy Gay-DMC combo at the 4-5 spot must be out of their freaking minds (and yes, I’m looking at you Bleacher Report!). It’s like telling Leonardo to paint Kim K. instead Mona Lisa or asking Vincent Van Gogh to paint something like “A Cloudy Night” instead.

Not only will Willie Cauley-Stein allow DeMarcus Cousins catch his breath on defense, he would also allow Gay, Ben McLemore, and whoever else in a Sacramento uniform to make some “mistakes” on that end but won’t nearly pay for it as heavily.

Of course, I’m not suggesting that the four other Kings leave Cauley-Stein alone to handle defensive duties, but wouldn’t it be great knowing someone out there behind you will always be ready to cover for all those unintentional defensive mishaps? 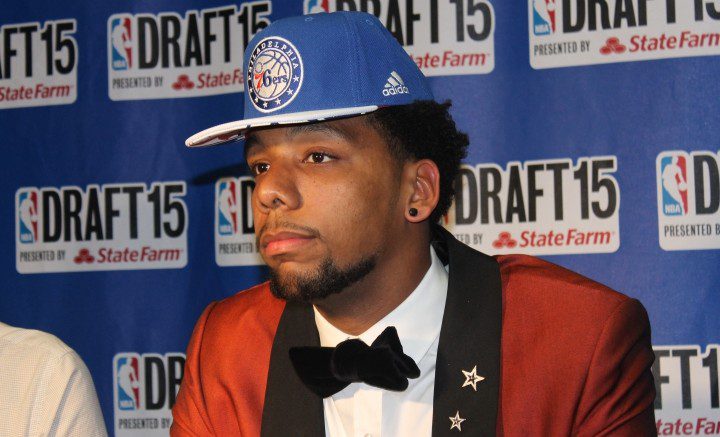 The Philadelphia 76ers are in dire need of a consistent offensive threat. That alone makes Jahlil Okafor one of the rookies who should start in the 2015-16 season.

Joel Embiid may miss the whole year again with a bum foot but an Okafor-Nerlens Noel tag team is more complementary, not to mention interesting.

Probably one of the more underrated Draft Day deals, the New York Knicks got consensus All-American in Jerian Grant in exchange of Tim Hardaway, Jr., who is now an Atlanta Hawk.

Nothing against Hardaway but Grant is one of the better college players around, fresh off a 16.5-point, 6.7-assist, and 3.0-rebound senior-year tenure in Notre Dame. His age might have been the reason why he dropped that low but after the Knicks drafted Kristaps Porzingis, we all know by know they don’t really care when you were born.

And it’s not bad to impress the boss with your game, either.

I’d like to think D’Angelo Russell’s summer-league performance is the exception and not the norm. But even if the Ohio State guard still comes out the gate a little rusty, there’s really no other direction for the Lakers to go.

Jordan Clarkson is primarily a scorer and Kobe Bryant is 37 years old which means, no one’s left to handle point guard duties but Russell. If the Lakers really think Russell is their point guard of the future, it makes no sense to delay the inevitable.

Speaking of the future and not delaying the inevitable, the No. 1 overall pick should by all means be taken for a joyride as soon as opening night. There will be problems, like the fact that he is foul prone and played only 21 minutes per last season in John Calipari‘s factory of future NBA players in Kentucky.

But would you rather have him step behind the living dinosaur Kevin Garnett and Adrian Payne or have him figure out the nuances by himself? I’d say the latter.