We do want little surprises here and there to spice things up, don’t we? However, as fantasy basketball die-hards, surprises are the last things we want. But since it’s pretty much a part of our fantasy basketball lives, we might as well deal with it the best way possible.

The Pelicans kinda suck, let’s face it, but they would suck a lot more if Jrue Holiday isn’t there. Anthony Davis ‘may be having a historic, Michael Jordan, Kareem-like season, but Holiday is the engine that keeps everything running smoothly. The Pelicans are 5-2 since the 2014 All-Star came back into the lineup after a personal leave and leads the team in net rating (+13.8), assist percentage (41.5%), effective FG%, and defensive rating (91.2). You don’t need to be a rocket scientist to figure out the Pelicans is a lot better than their 7-12 standings suggest with #11 in there.

Green, on the other hand, is the forgotten man in San Antonio whose impact isn’t felt outside of NBA enthusiasts. Green leads the team in net rating of anyone who plays at least 15 minutes (+15.5) as San Antonio went 8-2 with him in the lineup. The former 2nd round pick will give fantasy teams almost two treys plus a steal and a block per game at the shooting guard position, which is not bad considering he wasn’t even drafted in most leagues.

Joel Embiid hates his minutes restriction and so do we. “The Process” is averaging 28.6 points, 12.2 rebounds, 2.4 assists, 0.8 steals, 2 treys and 3.8 blocks a game per 36 minutes which is far and away the best stat line you will ever see in a long time, projections or not. Philly is just 4-14 this year but there is no question their patience on Embiid has paid off and he will be the face of the franchise going forward (Sorry, Ben Simmons!). As soon as the team decides to ditch the conservative approach on Embiid, the sky is indeed the limit for the big guy and that may even be an understatement.

Washington’s bench scoring was pretty decent last season, but in this one, they are downright awful. Their bench is 29th in the league in points, down from 11th last year, and they are also last in rebounds, 29th in assists, and last in blocks. I’m going to bet my house and my wife you don’t have somebody from the Wizards’ bench on your fantasy basketball roster right now. Or would want anyone from there anytime soon. 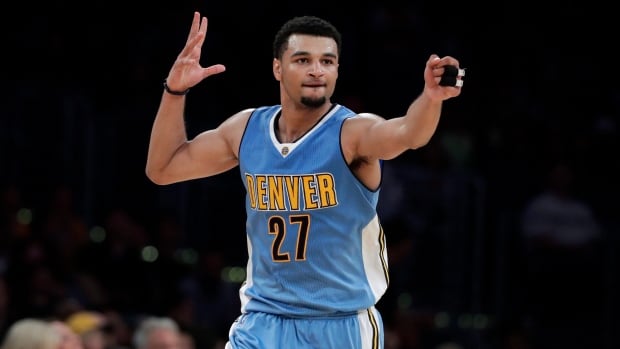 I don’t know if Coach Cal even believed himself when he said he saw Jamal Murray as the top overall pick in last summer’s Draft but his guy turned out to be, um, pretty good. After totaling 2 points on 0-for-16 shooting through four games, Murray has scored at least 18 in four of the past five, while drilling 15 treys during that same span. As long as Murray gets minutes (which he probably will considering Denver’s injury situation), he will be in the mix as a top 5 rookie when it’s all said and done.

Going into this season, Kevin Durant isn’t expected to leading in any kind of fantasy ratings but in this case, he is. Durant is averaging crazy defensive numbers (3.2 combined steals and blocks) and just had a 6-block game couple of nights ago while getting himself over 2 treys, over 8 rebounds, and almost 5 assists an outing.

Russell Westbrook may be averaging a triple-double and James Harden may be leading the league in assists, but Kevin Durant is far and above the most non-average player statistically in the NBA.