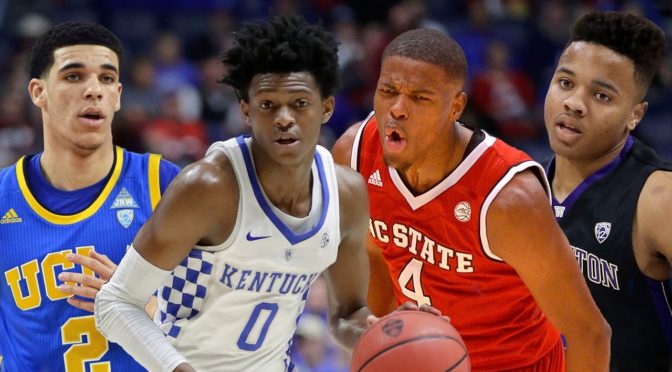 These are basically predictions so it should be taken with a grain of salt. However, it is obvious that some teams can offer rookies the opportunity right off the bat. (Hello, Atlanta and Brooklyn!)

Jayson Tatum, for example, averaged 18.2 points and 8.8 rebounds in 5 Summer League games en route to a slot in the All-Summer League second team. But could he even crack the 20-minute mark with Gordon Hayward, Jaylen Brown, and Marcus Smart in front of him in the rotation? Time can only answer the question but playing in a stacked Boston Celtics team could limit Tatum’s ceiling, at least, in his rookie year.

Markelle Fultz will be good, but if he hits the rookie wall sooner rather than later, his teammate Ben Simmons will be there as well as T.J. McConnell. Shorter leash equals lesser production not to mention Philly is targeting the playoffs after years of looking from the outside.

So who could be our anti-Jayson Tatum and force their way into fantasy relevance as rookies? Let’s look at 6:

It’s not even about IF Simmons can be a fantasy asset, but WHEN his injury allows him to be the star everyone envisions him to be. If healthy, Simmons is  Lamar Odom-type stat-stuffer with even better assist and rebound numbers. He may even offer the rare multi-position eligibility at PG and PF. What’s not to like?

Speaking of opportunities, the Texas product Jarrett Allen will get his share in a rebuilding Nets. Sure, Timofey Mozgov may start for the season but Brooklyn will eventually realize they got no choice but to develop what they have. Allen averaged 16.2 points and 9.8 rebounds in Big 12 play so the No. 22 overall pick can obviously contribute.

The Hawks’ core is now all gone, which means as far as opportunity goes, John Collins will have plenty. The Wake Forest product was named to the All-Summer League first team after he impressed with averages of 15.4 points and 9.2 rebounds on almost 60% shooting. He swatted 1.6 shots per game in college so we can expect him to be a force on those very rare defensive numbers as well.

Lonzo will be handed the keys right away to the Lakers offense so what do we expect? We may be a little demanding if we want triple-doubles right away from the former Bruin, but the assists should be there along with sneakily good rebounding. It remains to be seen whether he can get that quirky shot off with consistency against NBA defenses but if the Lakers can run the break with him directing, that means a lot of easy shots for Lonzo and for everyone.

The Mavericks doesn’t have too many scoring options outside of a 39-year-old Dirk Nowitzki and Harrison Barnes. Smith will bring elite scoring on the table as well as remarkable athleticism at the point guard spot. Rick Carlisle is known to be very hard on rookies but I believe that at some point during the season, he will just have to trust his rookie and let him roll. If the coach does, expect Summer League-esque numbers from DSJ, who dominated Las Vegas to the tune of 17.3 points, 4.8 rebounds, 4.2 assists, and 2.2 steals.

The Kings doesn’t have too many assets outside of Buddy Hield and yes, De’Aaron Fox. Fox will practically be handed all the minutes he could handle and while his outside shooting needs work at this point, his defense, quickness, and underrated vision should be enough to warrant a spot on ANY fantasy roster.