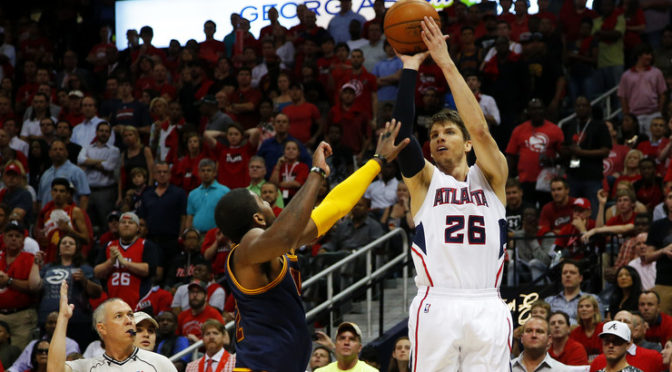 5 Awesome NBA Stats Of The Day-- Dec. 5, 2016 Or should I say the "Kyle Korver to the Cleveland Cavaliers" stats of the day? 1. The newest Cav makes the defending champs a whole lot scarier. Kyle Korver leads the NBA with an eFG% of 84% on spot up jump shots in the half court this season. — Synergy Sports Tech (@SynergySST) January 6, 2017 2. More on Korver to Cavs... LeBron James ranks 2nd in the NBA in assists on made 3s. Kyle Korver is a 42.9% 3-point shooter in his career. https://t.co/Ifl2Svftvt — END_OF_DOCUMENT_TOKEN_TO_BE_REPLACED

The Atlanta Hawks isn't quite rebuilding (re-tooling may be a better word) but they look different from last year. Two of its five starters are gone though they retained most of their bench from last season. Speaking of gone, fan favorite Al Horford is no longer here. Hometown boy Dwight Howard takes his place while the keys to the team's future was handed over to Dennis Schroder as they traded Jeff Teague to Indiana. It remains to be seen how the pieces fit for Mike Budenholzer but since Paul Millsap, END_OF_DOCUMENT_TOKEN_TO_BE_REPLACED

Overview: Last season was a historic one for the Atlanta Hawks that practically nobody in the NBA circles right now believes they can do it one more time. A franchise-best record 60-22 was set, they were the first team to go undefeated for a whole calendar month (17-0 in January 2015), and could have shoot down for the best overall record in the NBA if not for Mike Budenholzer being under the Popovich influence. Having said that, like San Antonio, the Hawks has a really solid core worthy of END_OF_DOCUMENT_TOKEN_TO_BE_REPLACED

One thing is for sure: the Larry O'Brien trophy will change hands soon and I couldn't be any happier. After a riotous 82-game regular season, excitingly boring set of first round series and nail-biting finishes galore in the conference semifinals, we are down to four teams. Golden State's Steph Curry and Houston Rockets' James Harden looks to add to the league's more anticipated one-on-one matchups in recent memory while the team-oriented Atlanta Hawks will try to solve the supposed one-man band END_OF_DOCUMENT_TOKEN_TO_BE_REPLACED

The first half of the season has gone and we have enough sample size to pretty much know what to expect as the NBA season goes on. However, conventional wisdom messes up sometimes and to be honest, it's more fun that way. You ready? Here are our five predictions for the second half of NBA 2014-15 season: 1. OKC Thunder Won't Make The Playoffs If the best player on your team spends more time wearing dry-cleaned suits than warmups and jerseys, you know you're in trouble. In an ultra-competitive END_OF_DOCUMENT_TOKEN_TO_BE_REPLACED