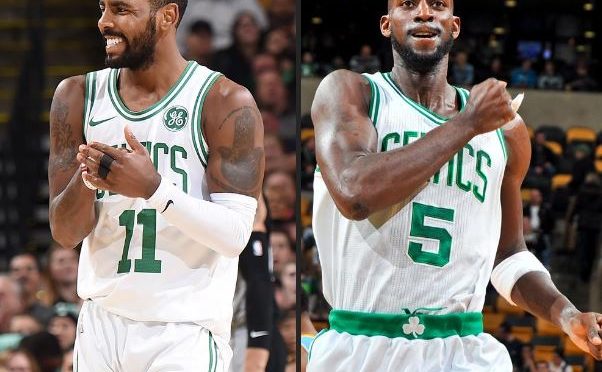 After all the hype and anticipation, it was devastating to see Gordon Hayward go down with a season-ending injury just 5 minutes into the season. The Celtics looked devastated and it showed early on, falling to 0-2 on the season. Since then, they’ve won six straight and the young team seems to have developed something special. With Terry Rozier, Marcus Smart, and Jaylen Brown all a year older and more developed, this is one of the deepest teams in the league. A lot was made of the fact that the Celtics only returned four players from last year’s squad, but it seems they’ve offloaded some quantity for quality players. I loved Isaiah Thomas as much as the next guy, what a story he was and still is. But Kyrie is simply a better, more well-rounded player.

The Celtics play unselfish basketball, and their offense, which focuses on moving the ball and getting everyone involved, has played to Kyrie’s strength as a passer. IT could fill it up on his own, but Kyrie makes the Celtics multi-dimensional with his ability to drive, pass it to one of Boston’s wings for a 3, or feed Al Horford or Aron Baynes for a dunk. The Celtics have the best record in the East, they’re playing great defense and rebounding well. Brad Stevens is getting the most out of his team right now, and I could only imagine the updated Vegas odds of the Celtics reaching the finals if Gordon Hayward was healthy.

On the opposite end of the spectrum are the Cavs. They’ve lost four straight, and there could be a few contributing factors. Let’s start with LeBron James’ not so subtle desire to leave Cleveland, again, at the end of this season. I’m not sure what more King James could want out of a city, his teammates and coach, but he’s made it clear he won’t be signing with Cleveland. This can’t sit well with his current teammates. Clearly they’re not good enough for LeBron, so where is the incentive to play hard for him?

Reason number 2: the Finals loss hangover. We’re seeing it with the Falcons in the NFL, and the same could be happening to the Cavs. It’s not easy to recover from a finals loss, especially one where you were blatantly overmatched. It can’t be good for team morale knowing that Golden State is going to wax you again, even if you get your act together to make it to the finals.

To continue on the theme of attitudes, JR Smith was right to be annoyed by Dwayne Wade starting over him to begin the season. We all know LeBron calls all the shots, but did Tyron Lue really have to put LeBron’s old broken-down buddy in the starting lineup over a younger, more capable JR Smith? Smith has busted his butt and been a solid contributor for the Cavs. He’s also an emotional guy and kicking him to the bench wasn’t smart for the team or JR’s motivation to perform.