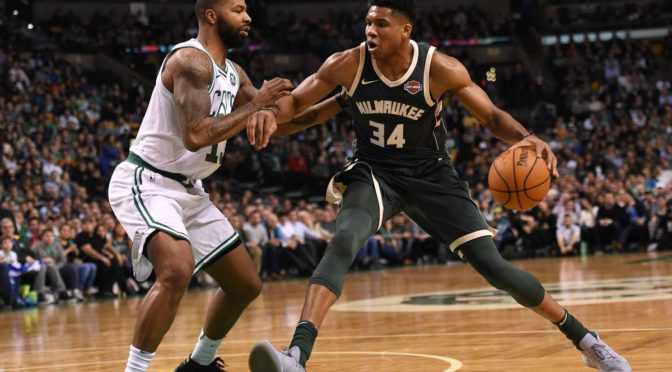 Well, my Round 1 predictions are pretty much spot on except for the Thunder-Blazers series where everyone, including me, picked OKC to win. My reason was that Jusuf Nurkic is too big a piece to lose in the playoffs and Enes Kanter is light years away defensively compared to Nurk. However, I did not know Damian Lillard can do this. Or this.

In Portland’s case, I have never been happier to be proven wrong. OK, so let’s move to the next round and let’s see what’s going on. Here are my NBA Playoffs Predictions Round 2:

I mean, come on, it would be crazy if you pick the Warriors over ANY team right now but this series IS the Western Conference finals. However, the Rockets dominated the regular season series, three games to one, showing that these Houston teams know how to deal with Golden State. I mean, the Rockets have taken the Warriors to the limit last year and some may argue they might be just a healthy Chris Paul hamstring away from going (and possibly winning) the NBA Finals.

That said, the Dubs are a different beast in the playoffs. Even though they may have lost Boogie Cousins for the rest of the playoffs, their engine is not about to miss a beat with Andrew Bogut in the lineup. Numbers game aside, the Warriors have too many weapons, too experience, and too poised to let this one get away. Warriors in 6.

The Blazers are riding on the momentum of Damian Lillard’s historic Game 5 performance vs OKC, but will they be able to continue their rise? I think so.

Although the Nuggets won the season series 3-1 against the Blazers, looks like the latter finally found an edge this time around. They are playing with chips on their shoulder and not just content that they are taking part. It remains to be seen whether Enes Kanter’s separated left shoulder is playable enough but the only way Denver wins this one is if Paul Millsap somehow finds some semblance of consistency. Other than that, I have the Blazers in 6.

Call me crazy but this smells like an upset to me. I mean, there is absolutely no one who can stop Giannis Antetokounmpo but Boston has enough manpower to make him think twice.

The guys at Rotoworld did the heavy lifting here, noting that Al Horford allowed only 16 points in 41 possessions against Giannis, while Semi Ojeleye and Marcus Morris didn’t do so bad either, allowing 19 points in 40 and 21 points in 28 possessions, respectively, this season. Personally, I never saw someone play defense on the Greek Freak as Horford did in last year’s playoffs.

Again, this will be a very interesting series and will surely be more enjoyable than the Game 7 classic they had in 2018. I just feel the Bucks can be too reliant on Giannis at times but the Celtics do actually have better shooters and more firepower aside from the fact that they have the personnel to slow Antetokounmpo down. It will be Celtics in 7.

The Sixers’ starting lineup is impressive but the deeper and more talented team overall is no doubt, the Raptors.

Second, the Raptors have Kawhi. Kawhi is no superman but he is defensively close if Clark Kent is a true human being and plays basketball. In three regular season matchups against the Sixers, he forced Ben Simmons to commit 24 turnovers and if you can put some serious doubt on this guy’s mind, he is practically useless. (We all know he can’t shoot, so…)

Third, Toronto’s bench will prove to be too much. While Philly’s top bench players are Boban Marjanovic, James Ennis, and Mike Scott while Nick Nurse is deciding every game whether to start Marc Gasol or Serge Ibaka. The difference is night and day. So, I’ll say Raptors in 6.