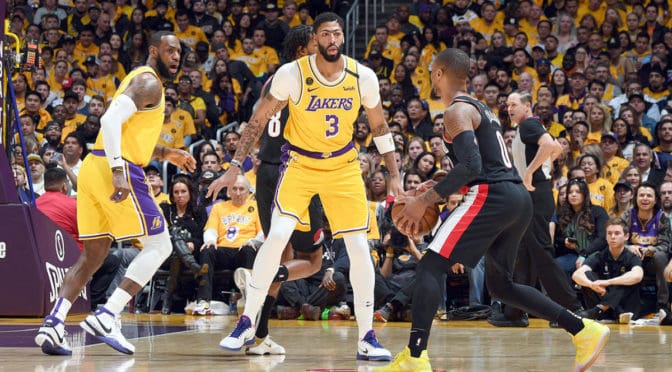 This year’s NBA Playoffs 2019-2020 will be different as many of you know – there will be no home court advantage, no fans, no travel.  But the best part is each team will play every alternate day and there will be very little time for adjustments and players to recover from injuries.

This NBA Playoffs 2019-2020 will be wide open compared to most year’s because of “no court”.  I wouldn’t be surprised if an 8th seed happens to upset a 1st seed. (I’m looking at you Damian Lillard and Portland Trail Blazers).

Below is how the NBA Playoffs 2019-2020 bracket lays out, followed by our Round 1 predictions and betting picks (if applicable). Please note, when sports betting – we are looking for value, which means the odds are better than their expected win probability.  We will only recommend underdogs or small favorites when betting a series; we will not lay huge chalk on favorites, especially this year with no “home-court” edge.

Two teams heading into the playoffs in opposite directions. In the Bubble, the Trail Blazers are 7-2 including their recent win versus Memphis Grizzlies play-in game; while the Lakers are 3-5 and have struggled to score when LeBron is off the court. Lakers were 2-1 in the season series, and all games were high scoring (average total 247 points).

This Trail Blazers are much stronger with Jusuf Nurkić healthy, a red-hot backcourt with Damian Lillard and C.J. McCollum. This isn’t your typical 8th seed team – when healthy, they can be top 4 in the West, easily!

The Lakers have two superstars in LeBron James and Anthony Davis, but have struggled with 3-point shooting and offensive efficiency.  With that said, I expect a better Lakers team (who are well rested), especially in Game 1. However, this series is much closer that the betting market price indicate.

However, Dallas Mavericks are an offensive juggernaut and can score. Mavericks made most 3-pointers this season, and have a superstar in Luka Dončić. Mavs have shooters everywhere – Doncic, KP, Hardaway, Curry, Burke.

This will be a high scoring series, and odds dictate that Mavericks only need to win 18% of the time to break-even.  Clippers have the edge, but Mavericks odds are juicy and tempting considering they score really well beyond the arch.

Denver Nuggets were 3-0 in season series vs Utah Jazz.  Mike Conley recently leaves Orlando bubble, which means higher usage for Donovan Mitchell, Joe Ingles and Jordan Clarkson. It is unknown how long Conley will be out for, but at least a handful of games due to NBA”s strict COVID-19 quarantine protocols.

Nuggets will not have Will Barton or Gary Harris to start the series. But that doesn’t matter because their offense will go thru Nikola Jokic, Michael Porter Jr. and Jamal Murray.

Both Utah and Denver play a slower pace, and are both ranked similar in offensive rating.  Utah is #18 and Denver is #19 in NBA Team Points per Game.  This will be a very close series as well because Utah have decent shooters as they rank #1 in NBA Team Three Point %.

Prediction: Nuggets in 6
Recommended Bet: None

It’s the James Harden show, since Russell Westbrook is expected to miss a few games of the playoff series.   The Houston Rockets lead the league in NBA Team Three Pointers Made per Game and Three Pointers Attempted.

However, Oklahoma Thunder is ranked #3 in Defense vsOpponent Three Point %. The Thunder will likely out-rebound Rockets every game with their size in the front court – Steven Adams, Danilo Gallinari – and a pesky Chris Paul.

If Russell Westbrook is going to miss 2+ games, i think OKC Thunder will have enough fire power to keep up with Houston.  Chris Paul is very good defender, and his protege Shai Gilgeous-Alexander has length to slow James Harden down.  OKC Thunder went 2-1 in season series vs Houston Rockets.

MIL Bucks are just too talented, powerful and have depth. The ORL Magic will struggle to keep up the scoring pace,  Bucks have length and scoring everywhere – Giannis Antetokounmpo, Khris Middlton, Eric Bledsoe, Brook Lopez.

Bucks were 4-0 vs Magic in their season series, and won by a convincing margin of 17 points. With that said, MIL Bucks are the big favorites in this series, and deservingly so.

Magic may will miss Aaron Gordon for at least Game 1 (and possibly longer).

Prediction: Bucks in 4
Recommended Bet: None

The defending NBA Champions went an impressive 7-1 in the NBA Bubble with the toughest NBA schedule.  This team is deep and can score with a variety of players – Pascal Siakam, Fred VanVleet and Raptors’ legend Kyle Lowry.  Raptors also have a much better bench than the Nets.

The Raptors went 3-1 in their season series vs Nets.  The defending NBA Champions are deeper, more talented and have better defense. The  Nets offense will go thru Caris LeVert but he will face a tough Raptors defense that ranks #2 in Defensive Rating.

Prediction: Raptors in 5
Recommended Bet: None

It’s Jimmy Butler vs TJ Warren. It’s going to be fun to watch. Heat went 3-0 in their season series Pacers, and match-up quite well against the Pacers (even when they had Domantas Sabonis in their lineup).

Heat is ranked #2 in NBA Team Three Point % Efficiency, and have a plethora of shooters and guards – Robinson, Herro, Dragic, Nunn, Jones Jr.  Heat also has the better bench, and role players.

Prediction: Heat in 6
Recommended Bet: None

I think Embiid is good enough to win at least 2 games in this series, but not in a best of 7. Boston Celtics are Top 5 in BOTH Offensive and Defensive Efficiency, and have enough player options (Jayson Tatum, Gordon Hayward, Jaylen Brown and Kemba Walker) to close out close games. If Embiid struggles or get into foul trouble in any of their games, it may get ugly.. I wouldn’t be surprise to see some Celtics blowout wins.

Prediction: Celtics in 6
Recommended Bet: None