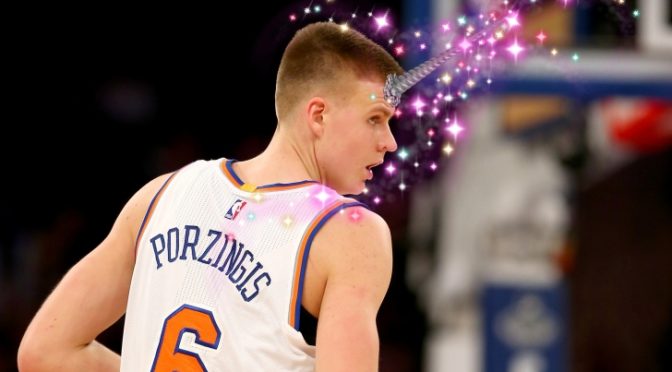 We’ve got 8 games tonight, so there are a lot of options to choose from. Let’s try and narrow it down to the best choices in the pick’em format.

In tier 1, we get to choose from Davis, Kings teammate DeMarcus Cousins, and Rockets guard James Harden. Harden has had to carry the load for the Rockets with Chris Paul out, but he had a rough shooting night on Monday (8-21), and the Knicks have been surprisingly effective against opposing point guards. So it’s down to the two Kings big men, and I like Davis here. He exploded for 39 points (13-20 FG, 13-15 FT), 10 rebounds, two assists and three blocks against the Magic on Monday. He looks well-rested and he simply offers a higher ceiling for points and rebounds compared to Cousins and Harden. 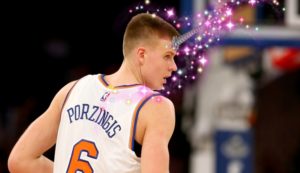 With all big men to choose from in tier 2, I’ll go with the biggest: Kristaps Porzingis. Porzingis totaled 38 points on a whopping 26 shots (14-26 FG, 4-7 3Pt, 6-6 FT), seven rebounds, and three blocks in a nail-biting win over the Nuggets. Kristaps is going to get you volume on a consistent basis. He clearly has no problem taking a majority of the looks for the Knicks, and he’s getting to the line. He’s grabbing a block or two a game and he’s a lock for at least 8 rebounds. Kristaps is a set it and forget it type of player so far.

We finally get something other than centers and power forwards to choose from in tier 3, so let’s take advantage. DeMar Derozan had a team-high 25 points on Monday’s win and is shooting over 50% from the field in his last 5 games. His 2.8 steals per game have been a nice bonus as well.

Al Horford has been on fire this season, especially as of late. He was toying with LaMarcus Aldridge most of the game and contributed with 13 rebounds, 5 assists and 14 points on 7-11 shooting. Horford has benefited immensely from the play of Kyrie Irving who has been finding him for easy dunks and open threes consistently. His high basketball IQ and court awareness has led to the hot start. He’s also been a DPOY candidate thus far, not that it will help you in DFS.

I’m going to recommend taking more than one Celtic again. Maybe it’s because I watch all of their games and I’m impartial. But today it’s also because Sacramento is abysmal, they played last night and had to fly to Boston for tonight’s game. Bad team + back to back nights + traveling to the top team in the East = big night for King’s opponents. Marcus Smart is available in tier 8 which could be the steal of the year. Granted, Terry Rozier has cut into Smart’s playing time and shot opportunities, but Marcus is always crashing the boards, and never loses confidence in his 3-point shot (this isn’t always a positive thing for the Celtics, but for fantasy purposes this a plus).

All tiers are from Draft Kings