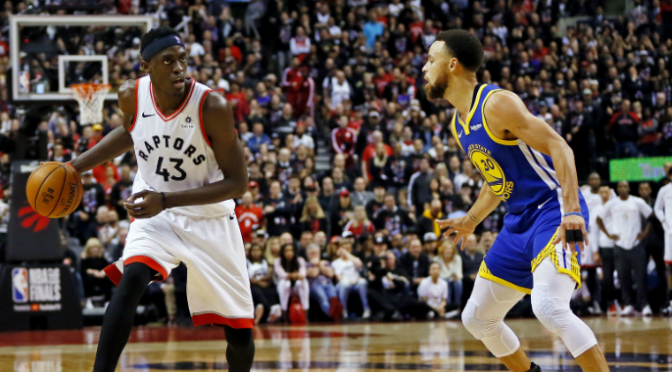 2.) The Warriors are basically trash without Steph Curry.

If you can’t read graphs or have problems reading them, the Warriors are +4131 with Steph Curry on the court in the last five years while a -447 with him riding the bench.

With 5 minutes and 16 seconds left in the first quarter, Steph Curry hit a three-pointer to mark his 100th made three in the NBA Finals, the most in NBA history.

In 20 Game 1’s in the Steve Kerr era, Thursday’s loss is only the second. Their only other loss came in 2016 when the Warriors lost Game 1 of the Western Conference Finals to, ironically, Kevin Durant’s OKC Thunder.

Game 1 is Pascal Siakam’s game so it only makes sense we have him here. Here’s one amazing stat: Siakam made 11 straight field goals in Game 1, which is the best of such streak in the NBA Finals in the last 20 years.

Siakam’s 32 points is the fifth most points scored in a Finals debut behind elite company. Allen Iverson is first (48), then Michael Jordan and Kevin Durant (36), and Tim Duncan (33).

Jason Terry and Shawn Kemp also had 32 in their respective Finals debuts.