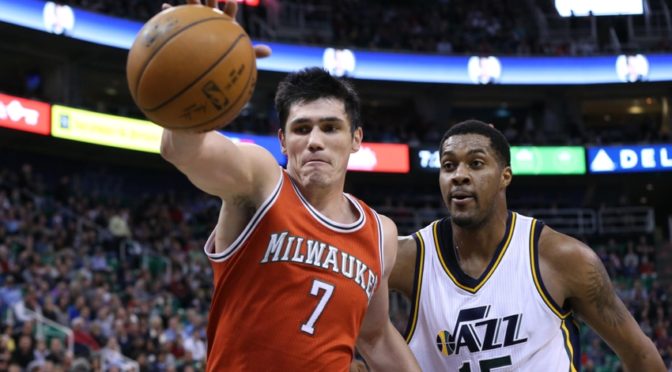 I can probably include a couple of Hawks here but let me start with the Turkish veteran. Atlanta is in full tanking mode and aside from Dennis Schroder (and to a lesser extent, Kent Bazemore), someone has to score for this team.

Ilyasova averaged almost 15 points in 53 games for the Sixers last season while contributing almost six rebounds and two assists. Ilyasova is also hitting over 1 trey a game over the course of his career and the combined 1.1 steals+blocks wouldn’t hurt.

The Spurs will be going without Tony Parker for at least a month and a half so the second-year man out of the University of Washington has the inside track on the starting PG job. He has impressed in the preseason, mustering up 9.3 points, 3.8 assists, 4 rebounds, 1.8 blocks, and 1.3 steals.

The lack of three-point shooting is kind of a letdown but I doubt owners have any reason to complain about that kind of well-rounded production.

It wasn’t so long ago that Favors was the Jazz’ best player. Last season, however, injuries limited him to 50 games and while a blend of 1.7 blocks + steals were nice, it falls short of the 2.7 he averaged the season prior.

Right now, health shouldn’t be an issue. Through five preseason appearances, Favors is shooting at an encouraging clip (55.6 percent) from the field while leading the team with an incredible plus/minus (12.4) in 20.1 minutes per game. The departure of Gordon Hayward, an injury to Dante Exum, and the unclear status of Rodney provide plenty of scoring opportunities and unclaimed usage to come around for Favors.

BI’s ADP is at the 9th to 10th rounds which means fantasy owners are not as high on him as Magic Johnson is. That’s understandable, given the horrible preseason he’s had so far. The thing, though, is that the Lakers brass and Luke Walton looks really keen on giving Ingram all the minutes he could handle. He played in 79 games last year in almost 29 minutes, which should still open up the possibilities of more production from the Duke product.

At his current price, he’s a low-risk, high-reward prospect nobody should miss on.

Make no mistake about it, the Nets are in love with Allen Crabbe. They tried to offer him big money in 2016 (before Portland matched) but this time around, they got their guy via trade. Crabbe’s preseason outing against New York is especially encouraging, and hopefully, it’s a sign of things to come. In just 11 minutes, Crabbe fired seven shots and made five (four three-pointers) and added a little extra on the side (one rebound, one assist, one steal).

In just 11 minutes, Crabbe fired seven shots and made five (four three-pointers) and added a little extra on the side (one rebound, one assist, one steal). Project the minutes to the mid-20’s and we’re talking about an athletic guard who can be a cheap shooting specialist with the ability to produce assists and steals.