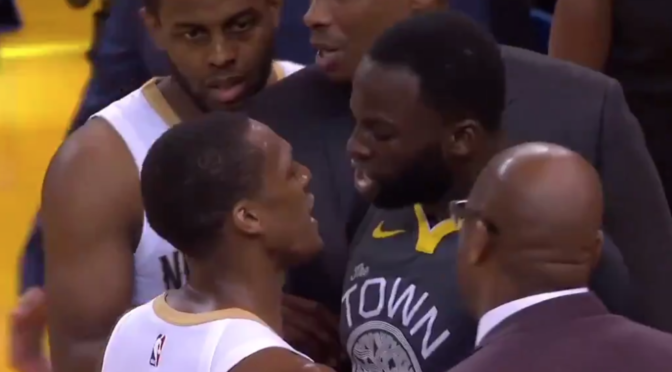 Building a DFS roster in the NBA Playoffs proves to be trickier than most nights but we welcome the challenge. Here are 3 players that should not be missing on any lineups for the two-game slate this Friday:

Playoff Rondo has arrived! RR has been the best Pelican in the playoffs not named Anthony Davis (no disrespect to Jrue Holiday) and has been playing better statistically than Chris Paul (who’s playing in the other bracket).  He is averaging 12.7 points, 12.7 assists, 7.5 rebounds, and 1.5 steals so far in the post-season and shows no signs of slowing down. With the series heading to New Orleans, we may not have seen Rondo’s best basketball yet in 2018.

It’s either Capela or Gobert on the center position (unless you decide to get AD) but I’ll give the slight nod to the Frenchman because he’s going to be at home. It’s not “Rocket” science, no pun intended. The Jazz was in the same position in the first round and Gobert decided to give Utah 18 points and 12 rebounds to gain control of the series. Hope it’s De Ja Vu all over again!

Some sneaky additions to consider:

David West, PF/C, Warriors- In the playoffs, the veteran big man is third in PER for the Dubs behind Steph Curry (one-game sample) and Kevin Durant. Well, he has played no more than 12 minutes a game so far in the conference semifinals but he has been crazy effective, averaging 6 points, 2.5 rebounds, 4.5 assists, a steal, and 1.5 blocks per game in that limited time.

Kevon Looney, Warriors- A better matchup for the long and lanky AD, Looney’s playing time has gone up to 23 minutes a night this series. There’s not so much here but some spot statistics with solid scoring but given Looney’s salary, he can be a good punt play if you decide to go top-heavy.

Alec Burks, Jazz- If not for Ricky Rubio‘s injury, Burks would be in Quin Snyder‘s doghouse buried behind Dante Exum. Instead, Burks has been an offensive sparkplug, at least on Game 2 where he poured 17 points, 4 rebounds, six assists with a steal and a block in the Jazz win. Encore? Don’t count on it but if he gets around 20 minutes, Burks could get off as well any bench guy in the NBA.