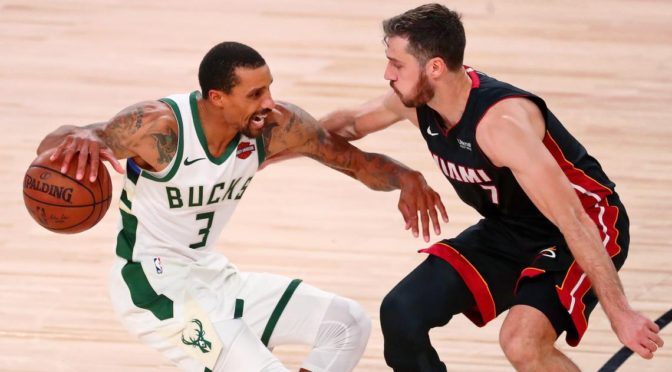 It will be a very tricky situation with Giannis Antetokounmpo for Game 5, but if he’s not good to go, a couple of Bucks are definite go-to’s. That includes Khris Middleton, Brook Lopez, and Eric Bledsoe. Middleton is a lock to go for 40 FP and I think Bledsoe should also play more minutes and more usage rate if Giannis indeed sits out.

If you don’t want to play the Bucks, Goran Dragic and Bam Adebayo have been pretty much unstoppable this series. Dragic is averaging 20 points, five rebounds, and five dimes in four games, while Adebayo is averaging 18.3 points, 13.5 boards, five assists, plus defensive stats.

If there’s someone I’d avoid, it would be Robert Covington (has not reached 30 FP the past two games), Russell Westbrook (too inconsistent), and possibly Jimmy Butler. Butler is averaging around 40 FP points this series, but I’d go with Dragic and Adebayo instead if I’m picking Heat players for this contest.

Speaking of consistency, Crowder has dropped fantasy points in the near-30s for three straight games. He is good for 15 points, six rebounds, and 2.5 dimes on 18 made threes over the first four games.

After just been back for two games, Frank Vogel’s trust in Rajon Rondo is apparent. He already played a total of 54 minutes in the series and even after that disastrous Game 1, he is still good for nine points, three rebounds, 6.5 dimes, and 3.5 steals in the series.

Tucker has just got himself a double-double and is pretty much a lock to score 25 FP. The best part about it is, he is just near the minimum salary.

Morris can be considered a punt play but after how things played out in Game 2, he has a chance to be the second big man next to Anthony Davis for the series. JaVale McGee has a bum ankle and Dwight Howard just received a DNP-CD.

Hill is one of the Bucks’ veteran presence and if they wanted another chance, he better step up in the possible absence of the Greek Freak. He did well in Game 4 with 12 points, five rebounds, and three dimes.