Only 2 games to pick from tonight, but 3 of the 4 teams are loaded with fantasy talent. I took Joel Embiid in my DFS draft last night and he scored 90+ points. Let’s see if we can pick out some similar gems for tonight’s matchups.

Boston’s defense is legit; they have the 2nd best defensive rating relative to league average since 1976. Jump shooters are just 16 for 51 from behind the three-point line against Boston Celtics forward Jaylen Brown this season. For that reason, I think Durant and Curry look to drive more and get to the line, but Al Horford, and Aron Baynes have been equally as stingy on drives to the hoop. Irving has plenty of experience playing against the Warriors and I like him in this game, his second with the mask. Hopefully the first game gave him enough time to get used to it and make adjustments to wearing it.

We’ve got a lot more choices here, but I like Devin Booker (although he was battling an illness this week so check before game time to make sure he’s a go). He’s averaging 25.9 ppg in his last 10 games including 35 points on Saturday, and 36 on Monday. Quite simply, Booker can get you tier 1 value for a second tier price.

Chris Paul is expected to play his first game since the season opener tonight. The good news for Gordon owners is that Paul is only expected to play 20 minutes. Gordon should still see plenty of opportunity for assists and points, and the Suns rank dead last in giving up points to opposing point guards. He’s averaging 32.1 FPPG (Fantasy Points Per Game) this year which is great value in tier 3. 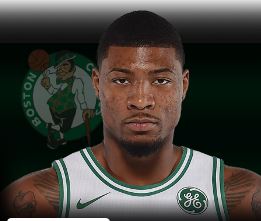 Smart had an awful game on Tuesday against the Nets, going 1-8 from the field for 6 points. However, he tends to play up to his competition and make clutch shots in big games. He’ll have those opportunities tonight in what could be a close game until the end.

Note: All tiers are from Draft Kings