I’ve been a big fan of the new DFS format called “Pick’Em”. In this style, you select players from different tiers. I like it because it narrows down the decision-making from dozens of players with various dollar values, to groups of similarly-skilled players. It also allows you the freedom to take multiple players from the same position, and removes the headache of trying to get your dollar values to stay within the budget. I’ll go through the first few tiers in detail, and then offer brief advice for the rest. No matter what style you choose to play tonight, I’m hoping the advice here helps you in some capacity.

This one seems like a no-brainer, I mean Giannis Antetokounmpo lit up the Celtics last week, and with Marcus Smart likely out another game with not one, but two ankle injuries, the Greek Freak should have an even easier time getting to the basket and racking up points. However, I’m going with Demarcus Cousins who scored 39 points (12-23 FG, 3-10 3Pt, 12-17 FT) while adding 13 rebounds, 3 assists, 3 blocks and a steal on Tuesday against Portland. With Anthony Davis expected to miss time with a knee injury, Demarcus Cousins will be expected to do it all. His 39 minutes on Tuesday suggest the Pelicans are going to lean on him heavily in Davis’ absence, and he’s playing his former team (the Kings) tonight in Sacramento. Cousins will have the opportunity, and all the motivation in the world to go off tonight.

Tier 2 gets a little bit harder as we see 2 point guards and 2 centers to choose from. Deandre Jordan did have 18 rebounds in Tuesday’s win over the Jazz, but he doesn’t have a block on the season and the ceiling for his point contribution is nowhere near the others in this tier. Irving and Lillard haven’t even been the most productive players on their teams this season (Brown and McCollum have), so that leaves us with Marc Gasol as my choice for Tier 2. He’s leading all centers in scoring and blocks, and he’s hitting three-pointers regularly.

C.J. McCollum’s hot start won’t last much longer, but I like his chances of outperforming the others in this tier. He’s shooting 66% from beyond the arc, and I’m hoping the confidence in his shot can extend to tonight’s game against the Clippers.

This tier features a couple of Celtics in Jason Tatum, and Jaylen Brown, along with role players Khris Middleton (SG/SF, MIL), Jrue Holiday (PG, NO), and Danilo Gallinari (SF, LAC). Call me a homer again, but I’m sticking with Jaylen Brown until he cools down significantly. He had 18 points in the first half on Tuesday (keep in mind it was against the Knicks), but as I said earlier this week, Marcus Smart and Marcus Morris are still out of the lineup and this means a ton of minutes and scoring opportunities for Brown. He’s one of the safe plays I like to mix into my lineups.

Quick hits on guys I like tonight from the lower tiers:

Justin Holiday, SG/SF, CHI – I recommended him earlier this week, and he dropped 25 points and shot 9 more 3-pointers on Tuesday. Clearly the coaching staff feels comfortable with him chucking up shots early and often which is great for fantasy points.

Robin Lopez, C, CHI – Lopez isn’t flashy, but he gets the job done down low. Atlanta ranks 25th in OPRK against centers, and Lopez has been consistent this season shooting 54% from the field. 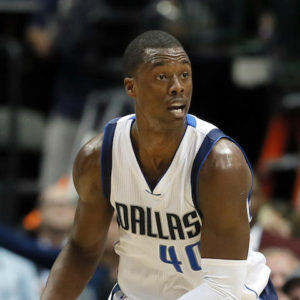 Harrison Barnes (SF/PF, DAL) – He’s playing 35.2 minutes a game this season, and although he’s been disappointing based on where you had to draft him in traditional fantasy formats, he’s a good DFS pick in tier 7.

Note: All tiers and stats are from Draft Kings.