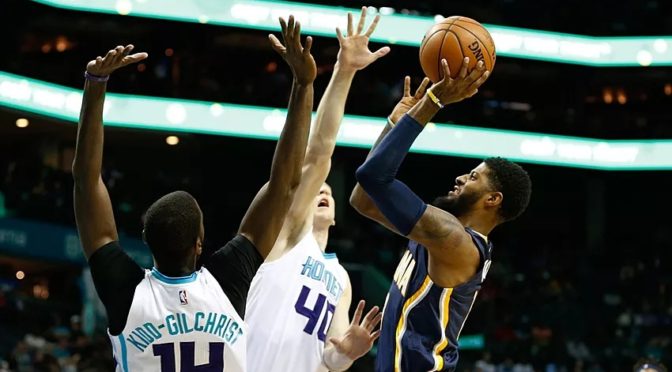 Paul George is absolutely on fire the past few games and should continue to do so in a favorable matchup against New Orleans. He had three 40-point games in the last SIX including a 47-point triple-double the last time out. Let’s see how hot he can get this time around.

With PG eating too much of the cap space, you can pair him with a high-potential player like Collins. Collins and the Hawks will be up against fellow cellar dwellers, the Knicks. The PF position is very thin on this game slate so make sure you had a near-elite one in the bag to build around.

Nothing fancy, but highly solid. Zeller has been playing really well lately and may even be considered a bargain in Yahoo DFS with a $14 salary. He has produced over 23 FP in each of his last six games.

The arrival of DeAndre Jordan would have meant demise for Robinson but the result was the opposite. He now had scored in double-digits in 5 straight games along with two double-doubles during that span. In that stretch, he also recorded 15 blocks. WOW!

Allen has made the most of his time with the Knicks, averaging 17 points, 3.3 rebounds, 5.3 assists, 2 steals, and over 1 trey a game in the past three.

Frazier is a little up-and-down but can produce nights like the 10-4-7 he had versus Orlando and 12-9-8 outing against Minnesota. So which Timmy would show up tomorrow? We don’t know but at least he’s almost on the minimum.