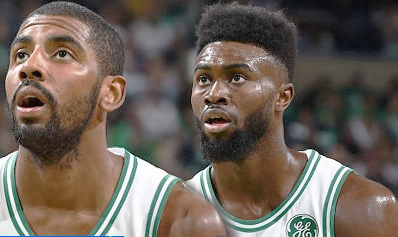 Hopefully you listened to my advice yesterday, here’s a quick recap:

Steph Curry dropped 29 points, Ben Simmons finally got his triple-double thanks to his hybrid-PG status, and Otto Porter was impressive again with a double-double. Frank Kaminsky scored 18 points including 3-4 from 3-point range, and Avery Bradley had a mixed night with 15 points, but just 1-5 from beyond the arc.

There are a lot of reasons to like Kyrie tonight. The Celtics haven’t played since Friday, so Kyrie will be well rested for a game against the Knicks who have given up the second most fantasy points to opposing point guards. Kyrie started to get it going late in Friday’s win against the 76ers, and I expect that to continue tonight as I think he’s finally settled in to his new team, and Brad Stevens’ offense scheme.

Normally I don’t recommend taking two players on the same team; there’s only one ball and it’s smart to diversify your lineup right? Well today I’m going to recommend another player from my hometown team because there are a lot of reasons to like Jaylen tonight. First, he’s been Boston’s best player so far this year, and I like that he’s been getting to the hoop consistently to draw fouls. He’s built off a great summer league and is shooting with a lot more confidence. Also, Marcus Morris is going to be out another week, so guess who’s going to play more minutes and be responsible for crashing the boards? Jaylen looks confident so far this year, and with the Knicks ranking 23rd OPRK (Opponent Ranking) against shooting guards, and I’ll take Jaylen at $6,000 all day.

He hurt his ankle last week against Miami, but he’s playing tonight and his price is affordable considering the Nets have given up an average of 127 ppg over their last three games. Look for Gordon to toy with a double-double tonight.

Someone has to try and score points for the Bulls, and Justin Holiday is doing his best. He’s scored 15 points in each of his last two games, and he chucked up a whopping 20 three-pointers. His shooting percentage isn’t going to impress anyone, but I’m looking for volume when it comes to DFS, and with 34 shots in his past two games, Holiday provides it. Another reason to like him here is the chance for garbage-time points in what is likely to be a blowout against the Cavs. 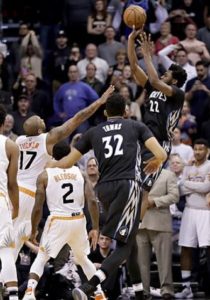 Wiggins has a great home matchup tonight against the lowly Pacers. I’m usually hesitant to take players on “super teams”, as Jimmy Butler and Karl-Anthony Towns absorb a good chunk of the shots and rebounds, but Wiggins is getting to the line consistently which I think has helped elevate his shooting percentage by allowing him to get in a groove early on. He’s rebounded the ball well thus far, with 5.7 RPG.