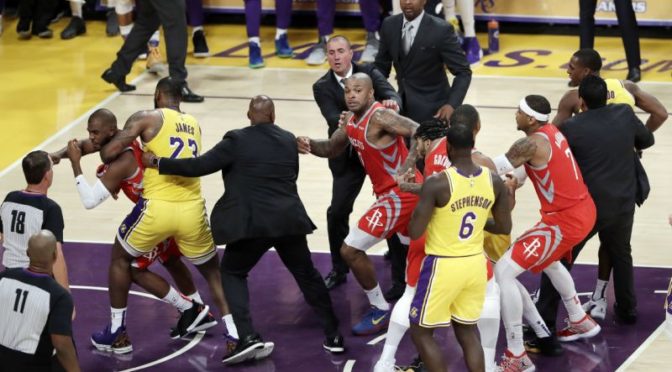 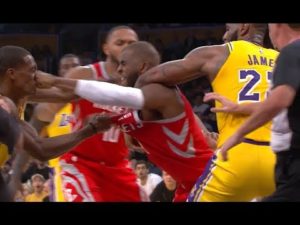 LeBron’s first game at Staples Center was definitely a memorable one. James score 24 points, 5 assists, 5 rebounds, 2 steals and 1 block, nobody cares about that at all because of what happened late in the 4th quarter.

The Rockets were up 1 with 4:13 left in the game when Brandon Ingram fouls James Harden. Ingram went right to up to Harden after the whistle and gave him a healthy two handed shove. Harden looked confused by the push, Ingram gets a technical then gets in the refs face and is finally corralled by Lance Stephenson, of all people, and walked out to mid court. Before anyone could figure out what was going on with Ingram, Chris Paul sticks a finger in Rondo’s face and Rondo responds by connecting with a left to Paul’s chin. Here’s were Brandon Ingram looses his head for a second time in a matter of seconds. LeBron/Melo/Gordon/Tucker were the 4 closest players to Rondo and Paul, a long with two refs. There was a scrum trying to get the two apart, then out of nowhere, Ingram comes flying in and throws a sucker punch at Paul. When all was set and done, Paul, Rondo and Ingram were all ejected from the game.

These three players are going to face multiple game suspensions, Ingram will receive the longest suspension of the 3. My prediction is 5 games for Paul and Rondo and 15 games for Ingram. Rondo and Paul have a history of bad blood, social media was flooded with clips from a decade ago of them getting into it. Paul is accusing Rondo of spitting in his face. Melo was right there and said he saw Rondo spit in Paul’s face, Rondo denies he spit and the Lakers stood by Rajon after they game. If there is no spit involved in the altercation, both will get 5, if there is a clip showing Rondo spitting he may get another another 3 games. I think 15 games is the minimum for Ingram. He initiated everything by pushing Harden, He was physically trying to intimidate the ref and then he threw a sucker punch at Paul to cap off the meltdown. Melo got a 15 game suspension for a sucker punch in MSG when he was with the Nuggets, Ingram didn’t knock anybody out, but he also did a lot more than throw one punch.

It is only fitting that Jokic’s amazing triple double would be overshadowed by the crazy ending at the Staples Center. Denver’s big man might be the most underrated player in the league, partially because he doesn’t looks like he should be an NBA star. It looks like Jokic needs directions to the weight room, his arms look like 2x4s, but he can ball. Nikola finished 4th in the in league last season with 10 triple doubles, only Westbrook, LeBron and Ben Simmons had more, and his first TD of this season was incredible.

Jokic had 35 points on 11 of 11 shooting, 12 rebounds, 11 assists, 4 steals and 0 turnovers. Twitter had about an hour to gush over Jokic’s stat line  before the Harden push. That whole situation obviously exploded on social media and Jokic’s amazing game was moved to the back burner. That’s par for the course with Jokic, he lives under the radar in Denver, but he can do everything. He has great court vision, excellent footwork for a 7 footer and can play on the perimeter as well as in the post.

He is a dark horse MVP candidate if he can lead Denver into he 4th spot, or higher, in the West.

4 Players you need to have on Sunday

The Hawks are heading into Sunday’s game in Cleveland pretty banged up. John Collins is inactive today and Omari Spellmen and Alex Poythress are both GTD. Rototwire has Vince Carter getting the start at PF, and even he is listed at GTD. Love is $8,500 today, slightly undervalued, he is going to be a miss match for whoever the Hawks run out there tonight.

Patterson is getting the start at PF over Grant, and the $3,500 is the lowest price in my lineup. Sacramento’s salaries seem slightly off tonight. Randolph is a GTD, Bjelica is listed as the starting PF at $4,300, with Bagley coming off the bench at $5,100. $3,500 on Patterson frees up a lot of salary and your getting starting minutes.

Clint Capela is undervalued today, you can pick him up for $6,200. Capela needs to work the pick and roll with Harden that lead him leading the NBA in FG% last season. Gortat doesn’t have the impact a Rudy Gobert or an Embiid does on the defensive end, Capela should be able to fill the stat sheet tonight.

I think this will be the last game Westbrook sits out before getting his season started, at the moment he is listed as out tonight. Dennis Schroder is $7,200, he is averaging 34 FFP and Sacramento gives up a league worst 136 points per game. Schroder will have this OKC offense running all over the Kings tonight.