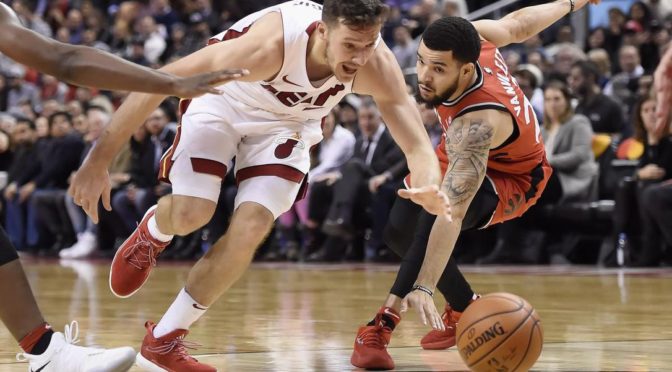 It’s a seven-game Friday night and we got lots of bargain options for NBA DFS Friday.

VanVleet is back and hasn’t missed a beat. His presence also lowers the impact of Kyle Lowry’s injury and allows their All-Star to rest up until the real battle begins.

In three games since his re-entry into the Raptors lineup, FVV is averaging 17.7 points, 7.3 assists, and a steal per game. What’s more important is he is playing 33 minutes a night on average, which gives the Wichita product so much opportunity to produce.

The Magic won’t be going anywhere with DJA as a starter but hats off to him, he’s playing real solid lately. He is good for 15 points, 2.3 rebounds, 7.5 assists, and 1.3 steals over a four-game stretch where Orlando is 3-1. At that span, he has a crazy 15:1 assist-to-turnover ratio, which I might say, is godlike.

Another D.J. in the list, the Bucks’ young center is projected to play major minutes because of several injuries to the roster. (Ersan Ilyasova, Pau Gasol, Nikola Mirotic are all out, not to mention guards George Hill, Sterling Brown, Donte DiVincenzo, and Malcolm Brogdon.) He has played an average of 30 minutes in the past two games with mixed results but as long as the minutes are there, he has an opportunity to produce at the minimum price.

Another PG on the list and is about the nTH time listed on here, we can’t reiterate enough how much he has upped the level of his play lately. The Clippers has won seven of their last eight and he is a big reason why averaging 14 points, 3.3 rebounds, 4.7 assists, and 1.5 steals over the past two weeks. He is also making 53% of his shots and is making 1.3 treys a game during that span.

Harris has been slowly getting into a rhythm lately, averaging 13.7 points, 4.3 rebounds, 1.7 assists, and 1.3 steals over the last three. His minutes have been on the high-20s lately, so the opportunity should be there all game long. I guess it’s safe to say we won’t be seeing sub-20 FP games from Harris anytime soon.

Goran Dragic, PG, Miami Heat— Got hot just in time for playoff positioning. Averaging 22.3 points, 3 rebounds, and 5.6 assists over the past three.

Chandler Parsons, SF, Memphis Grizzlies— I can’t believe the time has come that I will say this once again, but Parsons can be a streaming option for DFS Friday. He has strung two good games in a row averaging 13.5 points, six rebounds, 3.5 assists, and 2 steals during that span.

Brandon Knight, SG, Cleveland Cavaliers— His minutes have been in the high 20s lately and is averaging 14.5 points, 3 rebounds, and 4.5 assists over the past two.