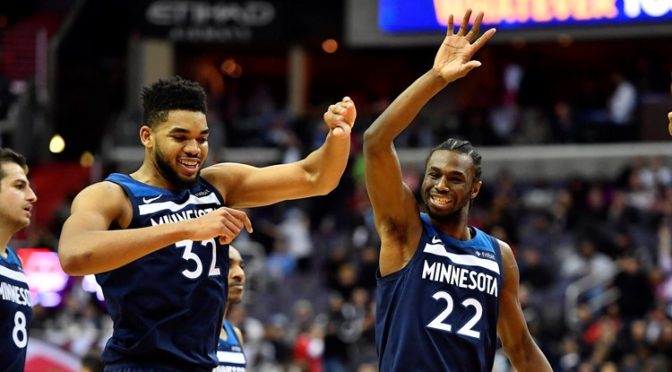 Jimmy Butler’s wish came true as the Minnesota Timberwolves decided to move into a different direction and trade the disgruntled star to the Philadelphia 76ers. The Sixers parted ways with Robert Covington, Dario Saric, Jerryd Bayless, and a future second-round pick to make the deal work.

As much as we are in awe right now because of the recent power shift, the fantasy-head in us only care about how the trade affects our fantasy teams going forward. Who are the biggest winners and losers in the Jimmy Butler trade from a fantasy basketball perspective?

KAT is the runaway winner for this one without a shadow of a doubt. This means the Wolves is now HIS team and everybody is below him in the pecking order. There’s no confusion anymore regarding that matter.

In the three games that Butler did not play in, KAT is averaging 27.3 points, 10.3 rebounds, 3 assists, with a steal and a block each. He has also made 10 treys during those games and shot over 50% on each. If that is what we will be seeing with Towns from this moment onwards, I’ll be one happy fantasy owner.

Wiggins will now become Minny’s top wing player and it’s only a matter of embracing the role now.  The former Kansas Jayhawk appeared in even lesser games than Butler with an injury, but if he’s healthy, he should take quite the share of usage rate that Butler is going to be leaving.  That said, Wiggins’ value should take a slight boost with Jimmy Buckets gone.

With Butler, Joel Embiid, and Ben Simmons forming a new Big 3 in the East, the logical thing to do for the Sixers organization is to surround them with shooters for them to have the space to operate.  That leaves Fultz as the odd man out as a non-shooter while J..J. Redick and Landry Shamet pick up additional value as 3-point specialists. It’s also possible that the Sixers will make moves to acquire another shooter (Kyle Korver?) spelling more doom for Fultz’ fantasy outlook.

Between Simmons and Embiid, the former is the likely star to suffer a little bit with the addition of another high-usage player. Butler’s usage rate is at almost 23%, which could almost certainly eat up on Simmons’ usage (22%) as the two share the backcourt and playmaking duties.

Both teams benefit from the trade in reality, with Philadelphia adding another All-Star scorer and Minnesota getting rid of someone who doesn’t want to be there. In fantasy, it’s clear that everything that transpired favors KAT  and Wiggins while Philly’s pecking order at the top is somewhat shaken.