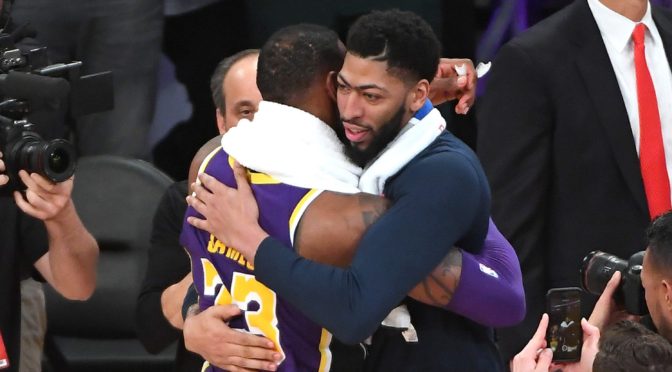 The first domino of the offseason has fallen and we are feeling the effects of the fallout. What we would like to know, though, is how the Anthony Davis trade from the Pelicans to the Lakers impacts both teams in a fantasy perspective.

Here’s how the deal went down:

Along those lines, the other two first-round picks are open for swaps and protections/unprotections over the next four years or so.

Fantasy Impact On The Lakers

After missing the playoffs for six straight seasons, there will be no reason to doubt them this time. The Lakers having two top-five talents on their roster should be enough to land them a postseason slot, if not legitimate championship contention in a wide-open Western Conference. Remember, the reigning West champions are not going to have Kevin Durant and Klay Thompson.

In Anthony Davis, he is legitimately the BEST big man in the NBA right now bar none. Statistically, he checks all the boxes: 25.9 points, 12 rebounds, 3.9 assists, 1.6 steals, and 2.4 blocks. The way he got those numbers were efficient, shooting almost 52% from the floor and 79% from the line with a PER of 30.9.

Those numbers are scary in itself but putting him beside a guy that commands a lot of attention himself and is averaging 27-8-8 and that’s like you to deal with two Thanoses! It’s probably the end of the NBA universe. But hold that thought.

This marriage is not without its drawbacks. LeBron James, the first Thanos, isn’t getting any younger himself and has played a creer-low 55 games last season with a groin injury. He averaged his lowest FG% clip in four years, the lowest 3pFG% in the past three years, and the lowest FT% of his entire career! OK, let’s not read much into that, it is probably an outlier for someone who is averaging close to 74% from line his whole career.

AD, the second Thanos, while cracking the All-NBA First Team in three of the last five seasons, has yet to play at least 76 games out of an 82-game grind. He can be injury prone. Last season, he played in only 56 games (lowest of his career) but that was a direct result of his trade demand in-season as the Pelicans looked to protect its asset.

Both James and AD has shown they still can be special even if they are playing alongside someone who has a high usage rate. AD’s usage dipped when he played with DeMarcus Cousins two seasons ago but he made it up with efficiency, shooting 53% from the field and 62 TS%. In LeBron’s case, the highest PERs of his career came in his tenure with the Heat, playing with Dwyane Wade and Chris Bosh. Needless to say, they will both be fine with their numbers and are targets with Davis certainly top 3 and James at the top 10.

If they can find a third star, though, things may get tricky for that guy. If it’s an Al Horford or someone that can work off the ball like JJ Redick, they can still be very effective playing with two All-NBAers. But if it’s Jimmy Butler, a Kawhi Leonard, a Kyrie Irving, or some other ball-dominant guys, someone may have to sacrifice the way Chris Bosh did for Miami.

The other guys in the roster except for Kyle Kuzma may be snubbed at this point (they only have 5 players under contract right now) but as solid as Kuz was last season, he may be relegated to the bench or a catch-and-shoot option with Bron and AD running the show. He’s not even a middle round option right now but in DFS where one of the two stars go on load management, pounce on Kuz as a cheap option.

Fantasy Impact On The Pelicans

Crowning the trade as a major haul for David Griffin is NOT an understatement. With them most probably taking Zion Williamson in the draft, they now get the best young core out of any team in the league. It’s not set in stone whether they will keep the No. 4 pick they got from the Lakers but in either case, they have the chance to pick R.J. Barrett, Darius Garland, or whoever is the best player available or get more assets or a young star. That’s a good problem to have.

What’s curious after all of this is what will happen to Jrue Holiday. At 29 years old, Holiday is the veteran of the group but does not fit the timeline. If they can explore a trade for Holiday, they may do it but if they’re going to pay 75 cents for the dollar, then they should just hold on to him which is not the worst option in the world. Perpetually underrated, Jrue averaged a career-high 21.2 points and 5 rebounds last season, to go along with 7.7 dimes, 1.6 steals, and 0.8 blocks.

The talk about Julius Randle declining his option next year could be a blessing rather than a curse. Randle dropped monster averages last season (21.4 points, 8.7 rebounds, 3.1 assists, and a combine 1.3 steals+blocks with almost 1 made 3-pointer a game) but he has defensive shortcomings that will likely be offset with the arrival of Williamson.

Williamson, with all attention his insane athleticism and highlight reel dunks, is on another planet defensively. He is not the lockdown defender yet but his natural abilities and hops make him a great help defender, either in closing out to shooters or swatting shots from the weak side. Williamson’s defensive rating in 33 games for Duke is an insane 87.4, according to Basketball-Reference. And with a PER of 40.8, which is godlike, Williamson may be a third-round target at the very least, even if he is still to sniff an NBA court.

Lastly, if Lonzo Ball and Brandon Ingram are to be allowed more freedom in Alvin Gentry’s offense, the Pelicans is a must-watch team with their fast pace, stingy backcourt defense and dozens of potential highlight plays.