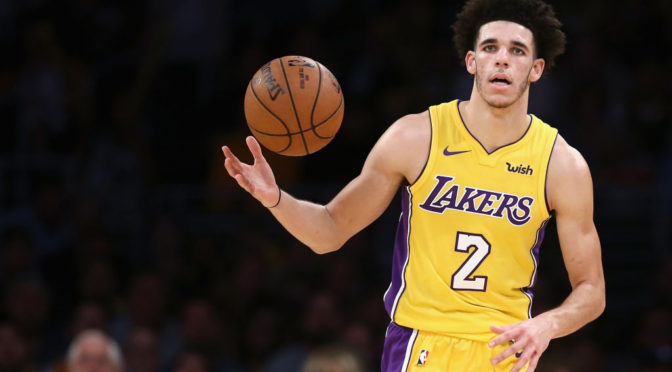 This is my first article for Fantasybasketball101. I will be giving lineups and draft tips on the DraftKings site. FanDuel is well represented on this site and I am a better player on DraftKings anyways so it works out nicely.

I am going to try to write an article on days that have between 5-8 games. Lineups I make in that game range are the ones I am confident in the most.

This is technically a road game for Lonzo and the Lakers, but I think the Staples Center is going to have a lot of Purple and Gold in the seats. The Lakers are a very exciting young team, while the Clippers are duct taped together at the moment.

I Like Ball’s matchup tonight against the Clippers mess of a backcourt. Beverley is out for the season and Teodosic only lasted 2 games. They have Austin Rivers playing 33.3 minutes at PG for the Clippers and Jawun Evans is coming off the bench. I think Lonzo has a nice night.

This is a value pick at $5,200. The Nets played last night, losing to the Grizzlies, and the Rockets are the best team in the West. Houston plays at an incredible pace, It will be clear early if the Nets are tired. Center and Shooting Guard are the Nets weakest positions, Gordon’s main match up will be against Caris LeVert . The only problem I have been having with Drafting Rockets is they are playing in a lot of blowouts and the starters aren’t seeing the 4th quarter.

I Think Barnes is a steal at this price. I don’t think he should be under $6,000. He is averaging 32.4 FPPG on Draftkings, You never see a player with a FPPG that high at $5,500. I would have been happy with getting another bargain, but I also love the matchup. You may justify Barnes low price if he was going against one of the best defense players in the league, Kawhi Leonard, but he is going to be going against Kyle Anderson. Anderson is a good young player, but he is no Kawhi. He is going to have his hands full trying to guard Barnes.

Caleb Swanigan and Ed Davis are going to be sharing a lot of the minutes against Porzingis, Vonleh will hopefully be matching up against Michael Beasley win he checks into the game. Vonleh can quickly get you 10 rebounds and he he is averaging 5.2 points per game. He is an aggressive defender so he can get 2 steals or blocks very easily as well. His has been playing increasingly more minutes, I am looking for 20 fantasy points from him, any more then that would be a bonus.  What I saved in salary I will make up the fantasy points in other positions.

This one is pretty obvious. Capela is a walking double-double, averaging 13 points and 11.5 rebounds, while also chipping in 2 blocks per game. The Nets had Mozgov and Tyler Zeller, not in the same class as Capela, I am expecting a big night from him.

This is a matchup that jumped out to me right away. C.J is one of the best shooting guard and alongside Damian Lillard he is part of a top 3 backcourt in the NBA. Courtney Lee is going to have a long night trying to guard McCollum.  This feels like one of those nights that C.J. goes for 40. He has a clear advantage over his defender and he has a great point guard that can find him and get him the ball. $6,900 feels right, I have seen him as high as $7,600 on Draftkings before, so it’s on the low end of his average price.

This is another player who’s salary is on the low end of their average. Tobias Harris is having the best year of his career. He leads the Pistons in scoring with 18.4 points per game. He also leads the team in minutes clocking 33 minutes per game. He is matched up tonight against Marcus Morris, who averages 10 less minutes per game. Morris is a good defender, but Harris has shown he can hit you from every angle. He is shooting 45 percent from 3 and his Free Throw percentage is 90%. You can leave him on the perimeter and he will drain Threes, but if you go out to contest he can drive right past you to the hoop and draw a foul. He opens the floor up nicely for Detroit’s offense, which has been the surprise of the NBA this year. 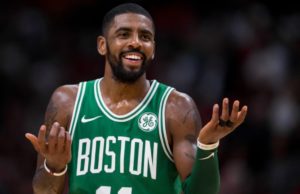 Kyrie has shown he can carry his own team. He bet on himself when he asked to be traded from Cleveland, and that bet has paid off early on this season. Kyrie has lead the Celtics to the best record in the NBA at 18-3. There is a very short list of players that match up with well with Irving, unfortunately, Reggie Jackson isn’t one of those players. That isn’t a knock on Reggie Jackson, Kyrie is a top 10 player in the league, He gives even the best defenders headaches. He has the best handle in the league, and the way he can finish inside, at his size, is incredible. $8,200 is a pretty low price for Irving, my arm doesn’t need to be twisted much to draft Kyrie.