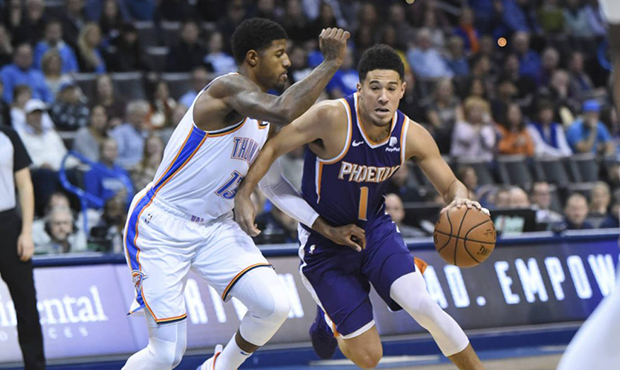 The reason why PG should be on everyone’s DFS roster is that Russell Westbrook will be serving his one-game suspension Monday night. He is averaging 30 points, 9.3 rebounds, 3.3 assists, and 1.7 steals over his last three. Expect him to be more aggressive as the Thunder’s primary scorer and facilitator for the night.

Speaking of being a primary scorer and facilitator for the team, Booker has done that and more for the Suns lately. Over a four-game stretch, he is good for 33.3 points, 5.5 rebounds, and 9.3 assists. He has already topped 60 fantasy points in two of those games and will be facing an anemic Chicago defense who has allowed an average of 119 points to opponents in the last 4 games.

Payton is running the show now with Jrue Holiday sidelines and while that did not result in any wins in the last six games, who cares? Payton is making history by being the first Pelican ever to record FOUR straight triple-doubles. He’s averaged 14.4 points, 11.2 boards, 11.8 dimes, 1.0 steals, and 1.8 treys over his last five and if Holiday is shut down, Payton may have the limelight all by himself to end the season.

Parker has carved out a little nice sixth man role with the Wizards and he has strung up three quality games in a row. He has averaged 18.7 points, 10.3 rebounds, and 2.3 rebounds during that span, dropping over 30 fantasy points in each. Utah’s defense may be a problem for Parker but he still has potential to produce since he is playing a lot of minutes.

With Bridges, the potential is there with him playing at least 33 minutes in each of the last three outings. That produced mixed results but Phoenix will be playing Chicago, so there’s that.

Poeltl has turned out solid performances one after the other including back-to-back 5-block performances against New York and Portland. Good news is, playing time has picked up lately for the young big, with at least 24 minutes in each of the last four games. Talking about upside!