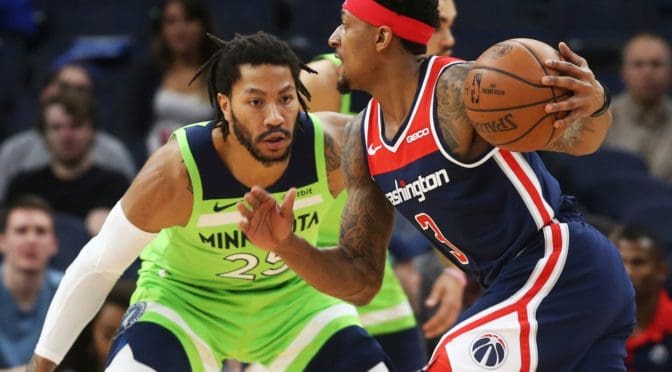 Saturday’s picks were kind of on point except for the horrible Ricky Rubio suggestion. I mean who would have thought he can only muster 6-3-8 with 5 TOs against a Golden State team with no point guard.  Rubio came in with 45 assists and 16 steals in the last four games so who can blame me for giving him a vote of confidence?

That said, Jayson Tatum (32-13-5 plus two steals and two blocks), Robert Covington (16 rebounds and 3 blocks) , and Jaylen Brown (22-5-3 plus a steal and a block) were phenomenal, even better than I was expecting. You know who was better than expected? Damion Lee, as a fill-in starter at point guard for the Warriors, registered 20 points, five rebounds, and eight assists, in the blowout win over Phoenix. That’s kind of the numbers I was expecting for Rubio.

Let’s see our options for March 1:

One name: Bradley Beal. The guy is averaging 41.2 points, four rebounds, 4.6 assists, two steals, and almost five treys per game over the last five. Those five-game numbers are even better than LeBron James and Anthony Davis (and both are considerably more expensive) that’s why it’s a no-brainer that I’m going with Beal on this one.

Since Beal costs $10,400 at DK and $48 at Yahoo, it’s imperative to get him a partner near the $7,000 threshold. I’d be thinking Brandon Ingram or Zion Williamson at this time with the slight edge to Ingram, who’s averaging 32.5 points, 6.5 rebounds, and 5.5 assists over the past two games.

Derrick Rose may be asked to do more Sunday night with an injury to Christian Wood. Rose got to 30 minutes the last game for the first time in February and tied his season-high in points. Rose is worth $6,600 at DK and just $22 at Yahoo.

If you’re playing early with two afternoon games, Al Horford and Josh Richardson, plus Shake Milton can definitely help your team. Tobias Harris now exceeded $8,000 at DK and the fact that the Clippers can throw multiple matchups at him, makes him a little less enticing in my opinion. Horford and Richardson are my choices here, especially Big Al, who can contribute in a lot of ways if he just gets enough touches.

If I can squeeze in Damion Lee here, I would. He must be feeling really good right now with a monster performance vs Phoenix, so I’ll look for him to repeat against a Wizards team, who defense is among the league’s worst.

Don’t read into it much here but how about Dragan Bender? Earning another start for the Warriors, the former lottery pick had 13 points, nine rebounds, four assist, three blocks, and a steal in 30 minutes. That may just be some bad blood between Bender and the Suns team that drafted him but I think he has a chance to keep it rolling against a defensively-challenged Washington team.