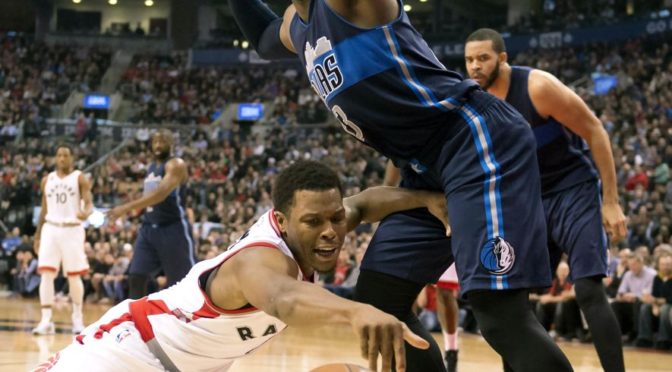 It’s a 10-game slate in the NBA and the big guns are playing but could there be other ways to win other than relying on Russell Westbrook, James Harden, or Demarcus Cousins?

The Raptors’ efficient offense runs through this guy and it’s no surprise that in his recent tear, he brought Toronto along with him. Lowry has scored at least 42 fantasy points in seven of the last eight games and will face a Philly team at home that is one of the league’s worst on stopping opposing point guards. All signs suggest K-Low continues his rampage.

Horford’s salary may qualify him as a “Middle Man” but he will be asked to do more with Isaiah Thomas still hurting. In the past six games, Horford is averaging close to 40 fantasy points and at that practice, how can you not tap his services, even against the Spurs?

Ariza wasn’t as good as he was a year ago in fantasy terms but at that price, he is more than serviceable, with a potential to blow off in games here and there. The latter is a distinct possibility when the Rockets face an equally fast-paced offense of the Sacramento Kings. He is averaging 28.7 fantasy points in the last six games.

Matthews is definitely over his Achilles injury. He has established himself as a legit scoring threat alongside Harrison Barnes and it looks like he has benefitted a lot from the return of Deron Williams (who’s own health issues appear to be over as well). He has made at least four three-pointers in each of his last six games and has reached the high 30’s in fantasy points in the last three.

Tyronn Lue pulled off a “Pop” and will give his big three a rest after Memphis coach David Fizdale decided to sit out Marc Gasol in both teams’ first game on a home and away set.  That will give others plenty of run, especially Tristan Thompson and most possibly, Kay Felder, Jordan McRae, and the others. He has been averaging 13.5 rebounds the past four contests.

Don’t look now but Luol Deng is actually balling in Los Angeles. The veteran has been one of the positives in the middle of the Lakers’ seven-game skid, topping 37.25 points and 31.5 points, respectively in the last two games. Brooklyn is the second-worst in the league in containing opposing small forwards so Deng might be in for another above average game.