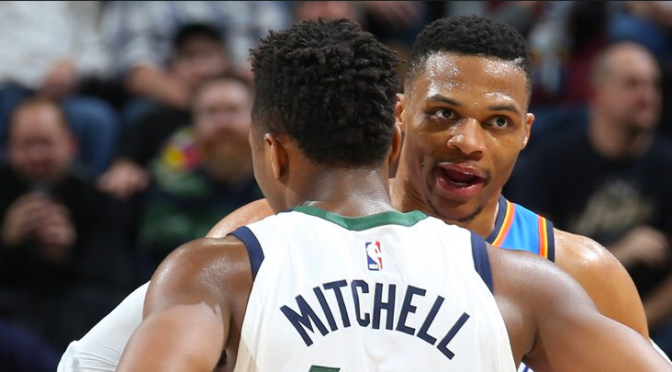 For those who bleed stats, not just Damian Lillard’s 50-point outburst in Game 5, check these 7 insane numbers to get you through the day:

1.) It’s not the playoffs without Timmy or Stockton.

It’s the first NBA playoffs without LeBron James since his rookie year but a fact that many overlooked is that Tim Duncan and John Stockton never missed the playoffs in 19 NBA seasons.

The longest streak of active players who have not missed the playoffs is James Harden (13 seasons) and J.J. Redick (10).

Ah, Brodie could build some castle with the BRICKS he is throwing.

According to NBA.com, Westbrook made on 32% of his shots from 15-19 feet and ranks dead last among 104 players that attempted at least three pull-up shots in the regular season.

And we’re still not talking about the playoffs here, bud. From there, we’re talking about 27% shooting on pull-ups (ranked 102 among players in the post-season) and only 20% in the paint including 17% on post-ups.

3.) Spida does his best Westbrook impression.

It’s not only the Thunder’s star who has struggled mightily in the playoffs. Utah’s Donovan Mitchell could literally hold Westbrook’s beer in that regard.

Ladies and gentlemen, here are your best shooters from 30-40 feet.

Among active players, Kevin Durant had the most 30+ point playoff game with 58. LeBron is first with 110.

6.) How much are they paying them again?

The best players for the Clippers in Round 1 are no doubt Lou Williams and Montrezl Harrell, as they have been all season. Wanna know how much these two guys are owed for next season? A combined 14 million dollars! Talking about bargains.

The Knicks are among the worst teams in the NBA but is ranked as the biggest market in all. Despite having a horrible record in forever, it’s safe to say the business is still doing good. VERY GOOD.

The Knicks ranked 10th in team merchandise sales at the league’s website this year, per the NBA. Not surprisingly, the Knicks did not have a player who ranked in the top 15 in individual jersey sales.