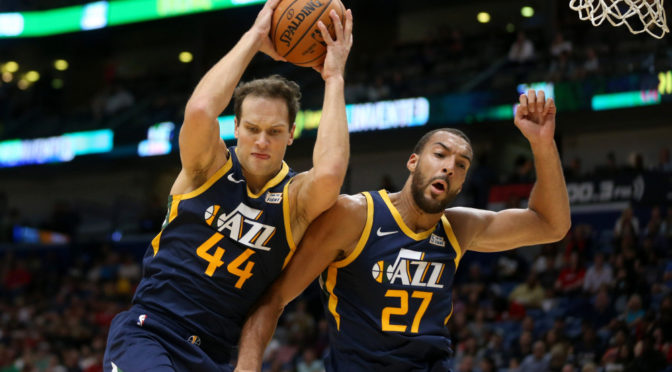 Currently ranked 126th in Yahoo and 66th in the Player Rater, Rudy Gobert is not the top-20 player we projected him to be in a VERY SMALL SAMPLE SIZE.

The rebounds are there (12.0) but since he is dependent on one category (blocks) that is basically non-existent for his standards (1.1), the Stifle Tower is relegated to that very low fantasy ranking. Couple that with an unusually high turnover rate (2.9 per game) and that’s a recipe for disaster.

Which means somewhere out there, there is a Rudy Gobert fantasy manager panicking . If you sense one, don’t waste any time to engage. It’s just seven games into the season and Gobert will certainly round up his stats like we know him to be.

BI has been playing out of his mind lately averaging 25.9 points, 7.1 rebounds, 4.3 assists, 0.7 steals, a block, and 2.4 treys made per outing. He is doing it with outstanding efficiency as well, hitting at a 55% clip. (That’s good for a top-9 value at the Player Rater and No. 16 at Yahoo rankings.) The problem is, can he maintain that pace for a whole season?

The answer is likely NO. Prized rookie Zion Williamson will be ready next month, which should cut into Ingram’s touches and overall usage. He is going to be the best value pick bar none this year (I picked him in Round 9 in most of my drafts) but if you can sell him high for a proven top-15 value, pull the trigger fast.

Like Gobert, Fox has not been that good evidenced by his Player Rater (83) and Yahoo Fantasy (182) rankings, respectively. Now make no mistake about it, that’s about to turn around soon.

In the past two games, Fox is averaging 24.5 points, 3.5 rebounds, five assists, and a block per game, all of which are Ws for Sacramento. We would want his assists and steals to be on the same vicinity as last season’s (7.3 APG and 1.6 SPG in 2018-19), and I think we’re seeing the good before it gets better.

Once Fox finds the balance between putting the ball in the hoop and setting up the table for his teammates, that’s where the fun is going to begin.

Bogdanovic is playing at a very high level as a stretch-4 in Quin Snyder’s offense but do we have reason to believe he can maintain this pace? I really don’t think so.

Part of the reason why the Croatian has been getting plenty of chances are the struggles of Joe Ingles and Mike Conley. Once Jingles and Conley get their groove back, it will cut into Bobo’s touches and numbers.

All good things come to an end. And while Nunn will have his moments here and there, a glut of backcourt players in the Heat roster will render the rookie’s leash rather short.

If you picked him up for a scoring punch early, good for you, but see if you can trade him for someone of long-term value.

Turnovers and lack of three-point shooting are the main reasons why DeRozan is ranked No. 92 at ESPN and 120th in Yahoo. If you have a good enough three-point shooting team, see if you can buy low for the USC product, who still produces 20.3 points, 5 rebounds, 4.2 assists, 0.8 steals, and 0.5 blocks per outing.

He is turning the ball over so much as mentioned (3.8) but there is reason to believe that that is an aberration more than anything else since he has only averaged two TOs per game for his career.

Brogdon is firmly at the top 10 in both Yahoo and ESPN rankings but really, how long will this last? I don’t know but then again, if you can trade him for known commodities, then do the deal.

He is averaging 23.7 points, 5.3 rebounds, 9.4 assists, and 1.1 steals on almost 50% clip from the floor and 97% from the line. Those are absolutely monster numbers but remember that Victor Oladipo is nearing a return which means those stats will soon take a hit.

Of course, don’t discard Brogdon for cheap change but if somebody covets him and dangles a top-15 player in return, I say pull the trigger.