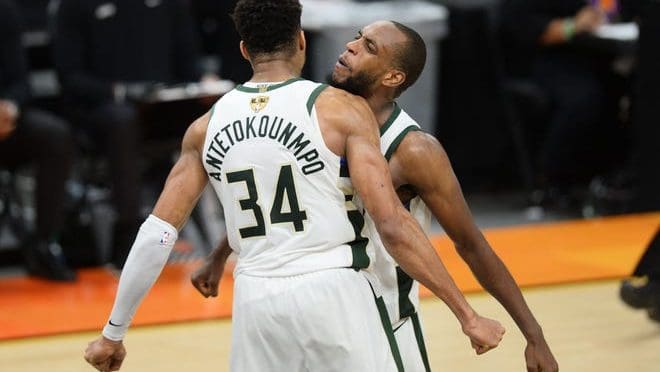 This NBA Finals is truly a breathe of fresh air, and we fans can tell from the competitive outings in the last four games. Because we are seeing different protagonists here from years past, that also means we are seeing a different type of statistics, something that we probable have not seen before,

Check out some of them:

According to Stat Muse, the Suns amde history in the Game 5 loss. They lost even though they shot 55% from the floor and a 60% from three. Phoenix is 48 for 87 overall and made 13 of 19 threes. They also made 90% of their free throws even though it’s low volume.

Still according to Stat Muse, Giannis Antetokounmpo has averaged 32.3 points, 13 rebounds, and 5.6 assists on 63 TS% in his first five NBA Finals games.

The Bucks Big 3 of Khris Middleton, Jrue Holiday, and Giannis combined for a total of 88 points. They also made at least 12 FGs each.

At one point in the first quarter, the Suns were up 16-11. When the Bucks sat Holiday down for Jeff Teague for three minutes, the score and the lead ballooned to 32-16.

The Greek Freek had 20 assists and only two turnovers over the past three games. That includes six dimes and ZERO turnovers in the Game 5 win.

The Holiday-Antetokounmpo-Middleton trio is the first to score at least 25 points and shoot 50% since the 1985 Magic-Kareem-Worthy triumvirate.

7.) A First Time for Everything

Before losing a 16-point lead in Game 5 of the 2021 NBA Finals, the Phoenix Suns were 13-0 this postseason when leading by 10 or more at any point in the game.