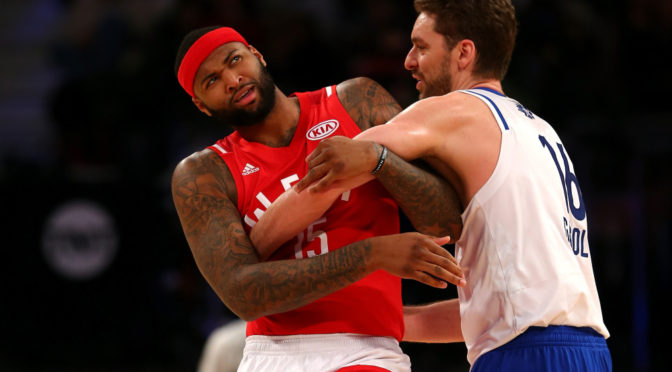 Both DeMarcus Cousins and Anthony Davis average over 50 fantasy points in the past 10 days. Boogie, however, is dealing with every issue known to a basketball player, namely foul trouble and a sprained ankle. He is doubtful on Wednesday’s tiff vs Dallas so unless you can make sure just before tip-off if the Pels will give Cousins a go, that salary should go to someone else.

The Warriors and the Spurs have faced twice before Wednesday’s matchup all San Antonio wins. Curry and three others chose to sit out in their latest game but the two-time MVP will play this time around. Don’t keep your hopes up with him, though. Curry will most definitely draw the ire of Kawhi Leonard without Kevin Durant in there and that means he may have to become more of a decoy rather than the main option on this one. Or if not, someone like Patty Mills or Danny Green will be more than happy to chase him around for Pop.

George has had an awesome past 10 games, netting at least 44 fantasy points in seven of those outings, including four 50+ FP performances. That will probably not happen against Memphis, though.

The Grizzlies are notorious grinders and ranks among the league’s slowest teams. In March, their pace is 93.72, dead last in the league. In their lone matchup last Feb. 24, the Pacers did squeak out a win but PG13’s numbers left a lot to be desired: 9 points, 9 rebounds, four assists, one steal, one trey, four turnovers on 3-for-12 shooting.

Hield has been pretty hot lately, playing a lot of minutes and contributing. To be honest, he is making Vlade Divac and Vivek Ranadive look like geniuses! The former Oklahoma Sooner is averaging 32.6 fantasy points in the past five outings, hitting 48.5% from the floor including 39% from deep. In addition to that, he is also contributing over five rebounds and over three assists a game.

But against Utah, you must forget about Hield, though. Hield has struggled in two previous meetings with the Jazz (one as a Pelican, one as a King), averaging only nine points, two rebounds, and a steal versus Kirk Snyder’s elite defense. And did we mention the Jazz is the slowest team in the league for the whole season?

Gasol is a wonderful addition for the Spurs but is just a bad matchup for the small-balling Warriors. The Spaniard may be effective opposite, say, Zaza Pachulia but lacks the quickness to keep up with the Dubs’ all-guard lineup. That is plainly reflected in Gasol’s statistics in two outings against Golden State: He has accumulated more turnovers (six) than assists, blocks, and steals combined (5) in 38 minutes. Definitely not a good sign.