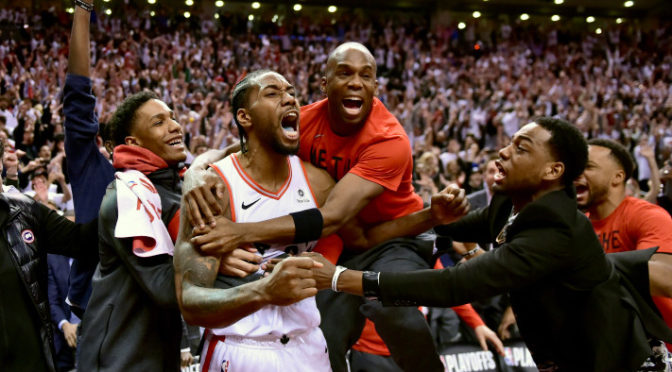 A couple of exciting Game 7’s in the Conference Semifinals just ended and I think I’d get over that Kawhi Leonard shot to win the series. Here are some stats to delve on to celebrate an exhilarating day of basketball.

The Klaw hit the game and series winner but he was brilliant ALL SERIES LONG. He averaged 34.7 points over seven games and capped the series with 41-8-3 and three steals.

Ibaka was basically useless in the first six games, relegated to the bench and playing less than 21 minutes a night. In Game 7, Serge was all over the floor in 29 minutes with 17 points, eight rebounds, and three assists, making 3 of 5 from deep and a team-high +23 for the Raptors.

Damian Lillard shot 3-for-17 on Game 7 but Portland still advanced thanks to C.J. McCollum. He finished with 37-9-1 on 17 for 29 shooting. And that one chasedown block on Jamaal Murray? Ooohhh.

This will be the first time a pair of brothers meet in the Conference Finals– Seth Curry of thee Portland Trail Blazers and two-time MVP Steph Curry of the Golden State Warriors. In the Eastern Conference, if Pau Gasol suits up, he will face against younger brother Marc of the Raptors.