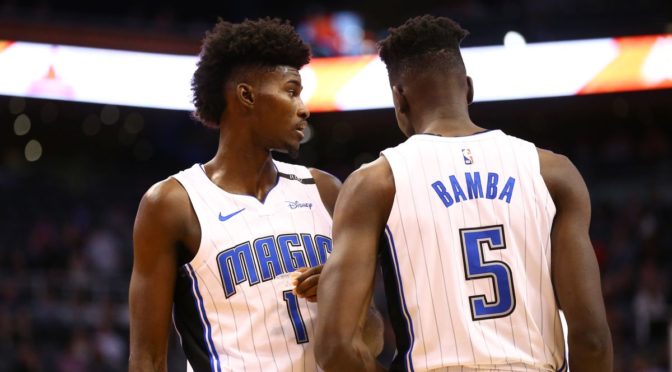 Considering the Detroit game was over in the third quarter, DiVincenzo’s line of six points, seven rebounds, two assists, and two steals isn’t that bad. Donte saw his minutes and role increase with Khris Middleton out. And even if Middleton returns at some point, he is still probably keep his starting spot since he has outplayed Wesley Matthews by a wide margin.

Brogdon missed the last three games with a back issue, that’s why he has hit a ‘really low for his caliber’ type of salary at DraftKings. Yahoo has still kept him at that prime-time range and while Brogdon has the potential to outdo it, you may want to look at other options. That said, having him at $6,000 at DraftKings (with Brogdon saying he feels 100%) is the very definition of “value”.

With Nikola Vucevic on the shelf, the center minutes is split over there in Orlando between Bamba and Khem Birch. Birch was virtually nonexistent statistically in 26 minutes versus Indiana while Bamba delivered nine points, seven rebounds, an assist, and two blocks in 21 minutes.

If you’re looking for some high-upside streaming options, Bamba makes the most sense.

Normally, I don’t recommend two streaming options in one roster but if you’re feeling luck, roll the dice with Bates-Diop.

KBD played 38 minutes with Robert Covington out and scored a career-high 22 with four rebounds and two assists. He is obviously just a short-term solution for Minnesota but if he’s playing heavy minutes like that, he is definitely a value for the minimum. However, if RoCo is available in the Hawks game, then forget about KBD altogether.

You know where this is going, don’t you? Aaron Gordon is out along with Vucevic so it’ll be up to Isaac to deliver the goods. He did just that the last time: 25 points, nine rebounds, four steals, and two blocks. Now. let’s see if he can make it two monster games in a row.