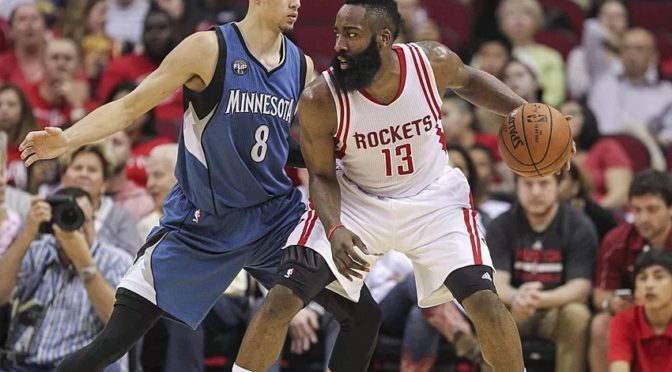 I’m trying to be a contrarian here with the Harden pick and Houston unexpectedly struggling on offense. The Beard still put up elite numbers (26.6 points, 5.7 rebounds, 7.7 assists, 2.6 steals) but not the jaw-dropping lines we see from him in seasons past.

What does that mean? That means he is due for an explosive showing and it could come at the expense of the Spurs, who is 23rd in the league when it comes to stopping opposing shooting guards.

LaVine is a prime candidate for Most Improved Player and is currently on a streak of 12 straight games with 20 or more points. I incorrectly predicted days before that he will slow down against Jrue Holiday and the Pelicans, providing his owners with a neat 22-point-5-rebound, 4-assist stat line.

The Bulls will be facing the lowly Cavaliers, who are dead last in the league in defensive rating and in the bottom 10 in stopping shooting guards.  This looks like a field day for Lavine.

Steph Curry is out for the meantime with a mild to moderate ankle sprain, making Quinn Cook the de facto starter for the defending champions. What’s better is, Cook will likely be at (or near) the minimum as of the moment, making him one of the better value picks for Saturday’s 8-game slate.

WCJ has been a revelation and it also helps that the Bulls’ frontcourt starters are all on the shelf.  The Cavs, their opponents on Saturday, is actually a pretty good team against opposing centers (3rd in the NBA vs centers) but I just could not pass up a big man with a statistical ceiling as high as Carter’s on his salary grade.

Carter Jr. has collected three-straight double-doubles and also has nine total blocks in that same span. Until further notice, he truly is one of the best value picks you can find out there.

Ingram has been up and down lately but with the Lakers blistering pace, he is still a threat to put up big numbers night in and night out. Maybe his six-dime outing against Minnesota opens up Luke Walton’s eyes about letting the Duke standout handle the ball more as a playmaking forward.

Another subplot to look at here is the potential absence of Lonzo Ball, who sprained his ankle in practice according to reports. If that happens, Ingram will have more opportunities with the ball and Rajon Rondo could have a field day as a fill-in starter.

Larry Nance, Jr.— Pretty much all healthy Cavs has a chance to shine with them very shorthanded but Nance, Jr. has my vote of confidence because of his potential to quickly pile up stats without playing 30+ minutes.

Jerami Grant— Has been very good for the Thunder lately and figures to play heavy minutes with only Patrick Patterson as the other guy in the OKC power forward depth chart.

Jordan Clarkson— Speaking of the other Cavs, Clarkson may be the only one with consistency with regards to scoring his fair share. He just had his first diverse statline Wednesday against OKC with 11 points, nine rebounds, and eight assists.