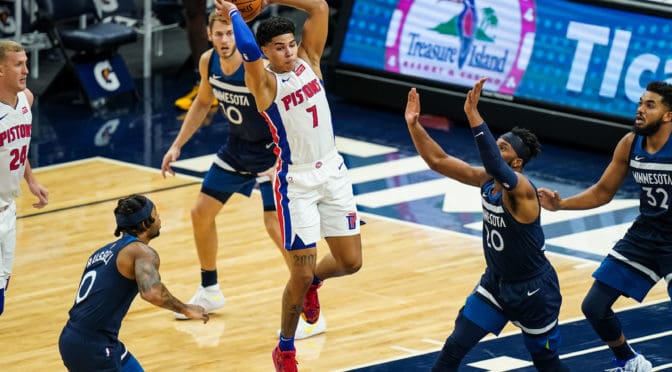 There are going to be a lot of unknowns in hunting bargains for NBA DFS. Ty Jerome did not play and Daniel Gafford did not do much in under 17 minutes of play. Anthony Lamb got his opportunities but fell way short (3 points and 5 rebounds in over 31 minutes of play) while Gabriel Deck did what he was supposed to do in 20 minutes. Only DaQuan Jeffries had himself a night, finishing with 17-7-5 versus Utah.

Let’s try again and see what are our bargain options for Sunday night.

Davis has been electric the past few games off the Kings bench. He has averaged over 17 points, just under five boards, and two dimes over the past three.

J-Rich is looking a lot like the Miami version lately, with back-to-back three-steal games leading to Sunday’s contest. We’re wishing he could pick up his rebounding and assist game as well, but his scoring is already there with double digits in seven of the last eight outings.

With the youth movement in full swing in Detroit, Doumbouya is playing a lot of minutes with mixed results. However, he begins to pick up steam lately and is averaging over 15 points and six rebounds plus extras over the past three.

Crowder will have more opportunities his way as Cam Johnson sits out with an injury. He did come off the bench and played well versus New York so could a repeat performance be in the offing against the Lakers? It’s highly unlikely but you never know.

I personally think Cory Joseph is a better fantasy option when given the minutes, but we know how it is. Hayes is Detroit’s PG of the future and the team is not interested in racking up wins. Hayes has been piling up dimes lately though, totaling 37 assists in the last five games. If he could just dial down his turnovers (21 TOs in the last five games), then he could give any roster a lift with his low salary.