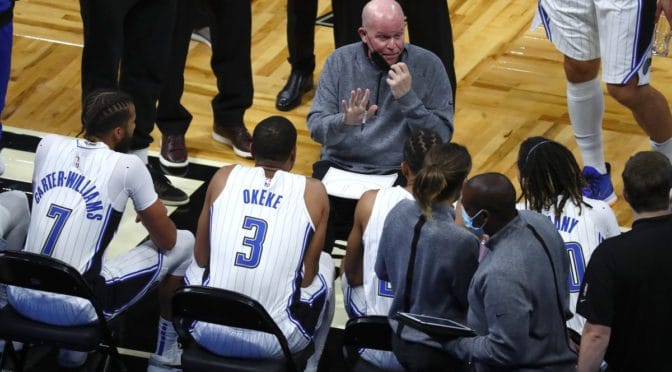 Choosing bargains to round up your DFS roster is a hit or miss. But with a three-game slate that features new-look rosters, we could unearth some hidden gems here and there.

Randle is admittedly not a high-ceiling player, but with the Magic short-handed in basically every position, he saw himself at the helm against Portland. He was mediocre–tallying 10 points, two rebounds, two dimes, and a steal– but he played 27 minutes and his backup Karim Mane, only 19. Again, I won’t be too high on Randle, and maybe RJ Hampton could leapfrog him tomorrow night in minutes, but as long as the starting spot is his, he has a chance.

Birch has hit the 5k mark in salary a night after he put up 14-15-4 plus six “stocks.” Wendell Carter, Jr. will be available tomorrow so that’s a potential hurdle, but then again, I don’t think Steve Clifford will give him bigger minutes than the holdovers in his first game for the team.

Bogie has reached double-digits in scoring in 5 straight games and played at least 21 minutes in each. He also made 14 treys during that span, including 5 vs OKC. His fantasy contributions are roller-coaster at best, but it’s good to see him back to his three-point shooting self.

Okeke will probably end the season as the Magic’s starting power forward. He has scored in double-digits in back-to-back games, including a 22-point output against the Blazers. He also made eight three-pointers over the last two games, and the 37 minutes was also his career-high. I prefer his salary to be much lower than what it is, but the guy has a crazy high upside.

Another option for center is Nurkic, who came back from an injury the last time and tallied 8 points, 8 rebounds, 2 assists, a steal, and a block in 18 minutes. He still has a minutes restriction, but he can quickly rack up stats because of his all-around game. He may still be a week or two before we see the Nurk of old but by then, he could already be in the 8k salary range.